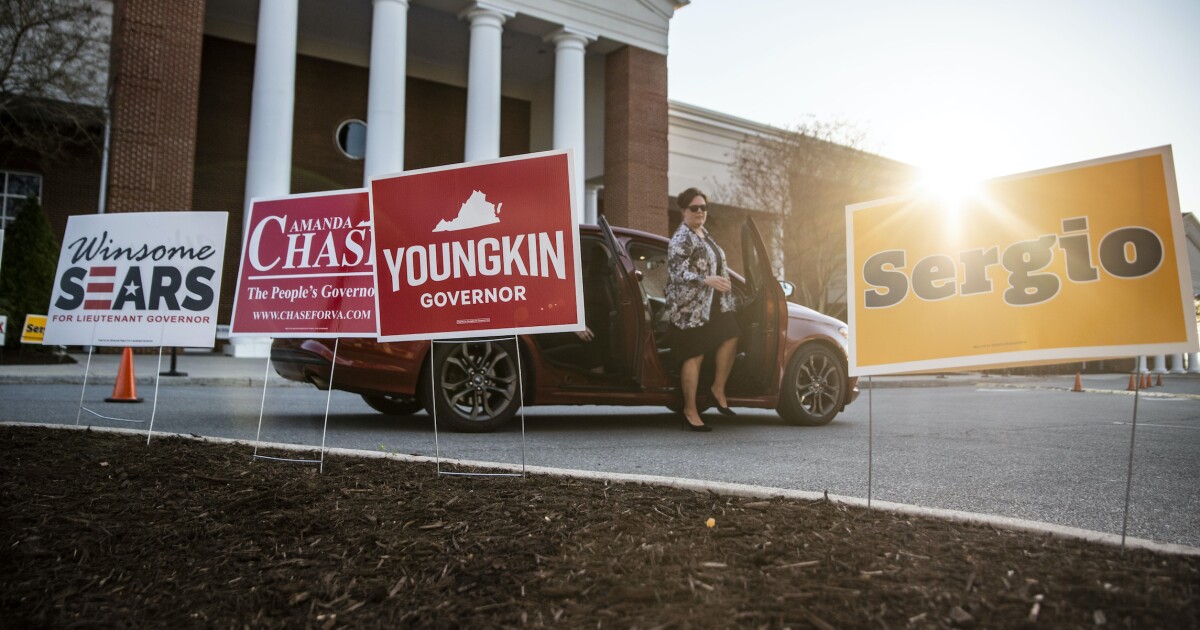 Virginia’s off-year state election cycle normally has the effect of acting as a barometer for where politics and parties will go after a presidential election.

But in the Republican side of the Virginia gubernatorial nomination, an unusual and hotly debated “unassembled” convention taking place on Saturday has overshadowed the ideological debates among Republicans about the future of the party.

The wide field of seven candidates who will be on the ballot do not fit neatly into Trump-loyalist versus Never Trump narratives, and the unpredictable ranked-choice nominating format has set up a dramatic final-week sprint among the candidates as they battle to headline one of the biggest competitive races in 2021, likely against Democratic front-runner Terry McAuliffe.

Glenn Youngkin, former co-CEO of the Carlyle Group private equity firm and a first-time candidate, and Pete Snyder, a digital marketing company founder and philanthropist, are the two biggest fundraisers in the race. Each of the businessmen loaned their own campaigns more than $5 million as of March 31, with Snyder[1] raising another $1.4 million and Youngkin[2] an additional $2 million from cash contributions, and each brand themselves as an “outsider[3].”

Snyder, who launched[4] his campaign with an “open the schools” message and is hammering[5] it in the final days of the campaign, previously sought the 2013 nomination for lieutenant governor and is better known in Virginia Republican Party circles, with former Virginia Attorney General Ken Cuccinelli backing his campaign. Former Trump White House press secretary Sarah Huckabee Sanders, now running for governor in Arkansas, also endorsed Snyder and will campaign with him on Wednesday on a “conservative outlaw tour” in northern Virginia.

Youngkin, meanwhile, scored an endorsement[6] from Sen. Ted Cruz on Monday. The Texas Republican will campaign with Youngkin through southern Virginia on Wednesday and Thursday. In his closing days, Youngkin has centered on a proposal to remove classifying the Pledge of Allegiance and celebrating Independence Day as “essential knowledge” in schools. “When I’m governor, we’ll teach students how to think, not what to think,” he said in a tweet.

Firebrand “Trump in heels” second-term state Sen. Amanda Chase, meanwhile, has captured national attention and says that delegates will send “a clear message that people can’t be bought.” She is leaning on her loyalty to former President Donald Trump, whom she briefly met at a recent Mar-a-Lago event and gave him a fist bump.

“In the culture in such a time as this, when the Left is trying to take over our country with its ideology, people are ready for a fighter like Amanda Chase,” she told the Washington Examiner.

As those three candidates flaunt their various versions of “outsider[7]” credentials, Del. Kirk Cox, former majority leader of the chamber, is leaning into his 30 years of experience:

“Republicans trust that I can go toe-to-toe with Terry McAuliffe in the general election because they have already seen me do it. When he was Governor, I was Majority Leader,” Cox said in a statement to the Washington Examiner. “Terry is telling people now that he’s running to enact his liberal wishlist — which includes a whole host of far-left actions that he could not accomplish during his first term because I stood in his way.”

Sergio de la Pena, a former Army colonel who legally immigrated to the United States from Mexico as a child and became deputy assistant secretary of defense, is stressing Virginia’s changing demographics in his closing pitch: “The only way that we’re going to be able to expand the voter base is to reach out to that Hispanic community. I am the Hispanic community,” de la Pena told the Washington Examiner.

The other two candidates in the race, Peter Doran, an author and former think tank leader who wants to eliminate[8] Virginia’s state income tax, and Octavia Johnson, former Roanoke city sheriff, had raised only small amounts of money as of March 31 and are not considered likely to win — but the question is who their second choices will be.

The ranked-choice convention system means that some candidates are overtly asking delegates to pick them as a second choice since no one candidate is likely to win a majority on the first ballot.

Only those who preregistered as a delegate before the deadline and signed a letter pledging to support the Republican in November may participate. More than 53,500 people signed up[9] — up from 8,000 participants in the 2013 convention but down from the 378,000 who voted in the 2017 Republican primary.

Virginia Republicans have long debated whether to choose nominees via a state-run primary or a party-run convention. Convention advocates worry that Democrats could infiltrate the race because Virginia has no party registration and that radical candidates with little chance of winning statewide in the blue-trending state could more easily win a primary. When the party switched to a primary instead of a convention for the 2017 gubernatorial nomination, aggressive right-wing candidate Corey Stewart came just 1 point behind former Republican National Committee Chairman Ed Gillespie in the race, spooking party insiders. The next year, Stewart won the party’s 2018 Senate nomination in another close primary, going on to lose to Democratic Sen. Tim Kaine by 16 points.

This year, Republicans opted to switch back to a convention nominating system — partly due to some wanting to block out Chase, who may have been able to build momentum with nontraditional voters.

Chase said that the convention process “disenfranchises a lot of people who would have normally wanted to weigh in on those decisions.”

But the coronavirus pandemic created a logistical challenge, preventing thousands of people from gathering in one location. After several changes in the format, frustrating the campaigns that needed to organize their supporters, the plan was set: Preregistered delegates will fill out ranked-choice ballots at an “unassembled” convention with 36 locations across the state.

The confusing and last-minute process has frustrated the campaigns, which spend much of their time communicating the process to voters rather than articulating their core messages.

And it’s created additional insular fights. The legal counsel[10] for the state party is on the payroll for Snyder’s campaign, leading to him stepping down from matters involving the party until after the convention. Chase, Cox, and Youngkin signed a letter[11] asking the state party not to use a certain election software vendor to count the ballots. The party will hand count the ballots, meaning final results won’t be known for days.

Tough fight ahead for the winner

The Virginia Democratic Party has not been shy[12] about criticizing all the major candidates on the opposing side.

The drama around the convention confusion is combined with varying support among the candidates to pursue “election integrity” matters. Youngkin launched[13] an “election integrity task force”; Snyder put out[14] an election integrity policy plan; Chase declines to call President Joe Biden her president because she believes “the 2020 election was stolen.” These positions are likely to be a line of attack against the eventual nominee.

“Virginia Republicans have spent this entire chaotic primary taking unpopular, far-right positions and advancing Donald Trump’s dangerous, outlandish election conspiracy theories,” said Virginia Democratic Party spokesman Manuel Bonder. “While many questions about this rigged convention remain unanswered, one thing is certain: whoever is crowned on May 8th will be too extreme for Virginia.”

A Republican has not been elected to Virginia statewide office since 2009, putting the ultimate winner of the GOP convention up for a tough task.

But the candidates are optimistic that the state can be competitive again, particularly in the aftermath of prolonged school closures in northern Virginia that may energize critical suburban voters.