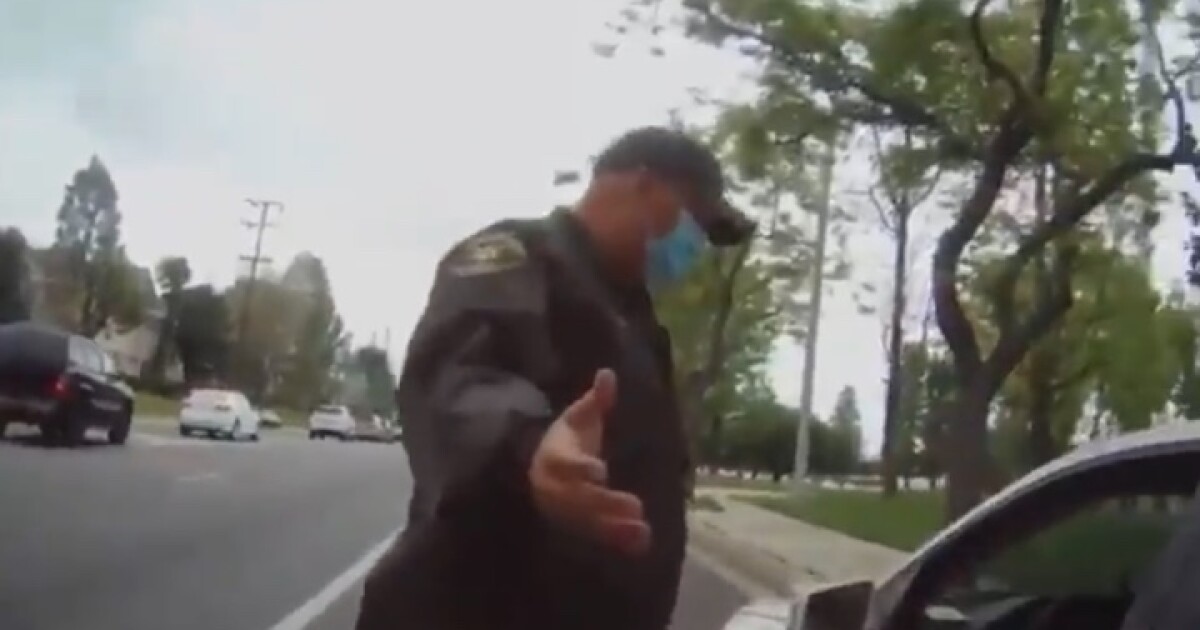 Body camera footage of a routine traffic stop in early April captures the moment a Hispanic Los Angeles County Sheriff’s Department deputy was harassed and berated by a racist motorist who insisted he was both a “murderer” and a race traitor.

Racist and anti-police. A twofer!

I suppose this is what you get when you have a culture that tells people hating the police and hating the “wrong “ kind of minorities is acceptable, if not laudable, behavior. This is exactly what the toxic ideology of “wokism” teaches — see, for example, the reaction[1] to Sen. Tim Scott’s rebuttal[2] of President Joe Biden’s address to Congress[3].

The video incident above, which took place in San Dimas, California, begins with the police officer pulling over the female motorist for allegedly using her cellphone while driving, which is illegal in the Golden State.

Before the officer even has a chance to say anything, the woman informs him she was driving under the speed limit.

“I pulled you over because,” the officer begins to say before he is cut off by the woman.

Just another day at the office, huh?

“You can’t be on your cellphone while you’re driving,” the officer said, asking the woman for her driver’s license.

“It’s at my apartment,” she said. “Can you call your supervisor please?”

The officer responds, “I already did. He’s on his way.”

“Good, because you’re a murderer,” the woman said.

The motorist, who has not yet been identified, grows increasingly hostile, ratcheting up her rhetoric with each sentence. The officer, for his part, never once loses his cool.

“You scared me and made me think you were going to murder me,” the woman says later.

“Well, that’s not just a feeling,” the motorist said, repeating for the umpteenth time, “You’re a murderer.”

The officer asks the woman if she at least has a picture on her phone of her driver’s license, which she does.

“I’m perfectly legal, and I’m a teacher,” she said (as if her alleged occupation were somehow germane to her alleged traffic violation). “So there, murderer.”

“You’re a murderer,” the woman says again, clearly intent on provoking some sort of altercation. “You’re threatening to kill me.”

Later, the deputy’s supervisor arrived on the scene to inform the woman personally that she was being cited for using her cellphone while driving. “All you need to do is just get your signature,” he said. “Here you go, ma’am. Sign here.”

“For him being a Mexican racist?” the woman asks. “What is that name?”

“Just sign that citation, ma’am,” said the supervisor, learning quickly just what sort of insanity his subordinate had been putting up with that morning.

This woman was not just some irate motorist. She was clearly attempting to instigate conflict. As it turns out, she has a history of this sort of thing, according to the LA County Sheriff’s Department. She is known for leveling false claims against deputies.

LA County Sheriff Alex Villanueva, for his part, told Fox News[4], which first reported the incident, he is “appalled” by the woman’s behavior.

“She claims to be a teacher,” said Villanueva. “I’m not so sure where she is teaching. … But if she represents her profession, is that an indictment on her profession and the caliber of people?”

He adds, “You have one incident like George Floyd. … But some people want to label the entire profession as if everyone was a Derek Chauvin. It shows you that bigotry, racism comes in all, colors, and all ages — that’s proof of that right there. If you want to call all of the deputies murderers, unfortunately, you are doing the exact same thing you’re accusing other people of doing against your own kind.”

With the spread of wokism and its perfectly racist brand of anti-racism, you know incidents such as the one in San Dimas are probably going to become quite common.