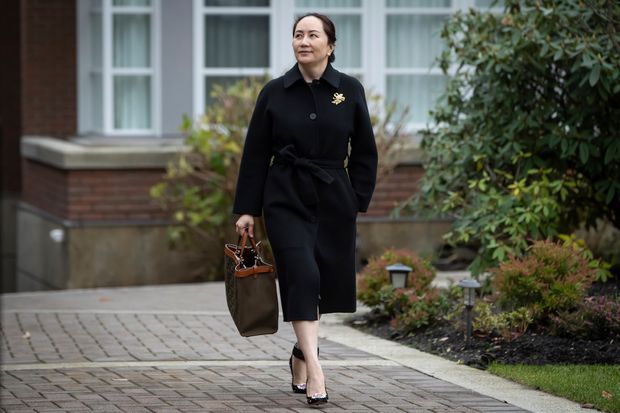 The U.S. Justice Department is discussing a deal with Huawei Technologies Co. finance chief Meng Wanzhou that would allow her to return home to China from Canada, in exchange for admitting wrongdoing in a criminal case that has strained Beijing’s relations with the U.S. and Canada, people familiar with the matter said.

Lawyers for Ms. Meng, who faces wire and bank fraud charges related to alleged violations of U.S. sanctions on Iran on Huawei’s behalf, have spoken to Justice Department officials in recent weeks about the possibility of reaching a “deferred prosecution agreement,” the people said.

Under such an agreement, which prosecutors usually use with companies but rarely grant to individuals, Ms. Meng would be required to admit to some of the allegations against her but prosecutors would agree to potentially defer and later drop the charges if she cooperated, the people said.

Arrested two years ago while transferring planes in Vancouver, Ms. Meng has been confined to the city, where she has a home. She has since fought extradition to the U.S.—a process allowing multiple appeals that can take years to resolve—and her situation has personified for many in China attempts by Washington to stymie the country’s global ascent.

An agreement wouldn’t only allow her to return to China, it would also remove an issue that has caused Beijing’s relations with Ottawa to plummet and has added to a downward spiral in ties with Washington. A deal could also pave the way for China to return two Canadian men who were detained there soon after Ms. Meng’s arrest, a factor that is in part motivating the discussions, the people said.

The Trump administration sees Huawei as a national-security threat and says that Ms. Meng’s activities on behalf of Huawei’s work in Iran are part of a pattern of corporate wrongdoing. The U.S. actions have enraged Beijing, which accuses Washington of discriminating against Huawei and has called on Canada to release Ms. Meng.

Negotiators for Ms. Meng and the Justice Department are speaking again this week in hopes of reaching agreement before the end of President

Trump’s
administration, some of the people said. Huawei officials are also holding out hope that President-elect

Joe Biden’s
administration might be more lenient, some of the people said. A spokesman for Mr. Biden didn’t respond to a request for comment.

Ms. Meng’s lawyers and Justice Department officials are working to determine whether there are terms that both sides can agree to, two of the people said. Ms. Meng recently declined to approve a draft agreement because she didn’t agree with the way her communications with some of Huawei’s financial institutions were described, one person said.

Ms. Meng is the daughter of Ren Zhengfei, the founder of Huawei, one of China’s leading companies and a global pacesetter in telecommunications gear that the U.S. has alleged engages in technology theft and may abet espionage by Beijing. The company has denied those allegations.

Ms. Meng has argued that she has been wrongly accused and that the extradition request is improperly based on political motivations at a time when the U.S. was seeking the upper hand in prolonged trade and technology tensions with China.

At a regular press briefing on Friday, Chinese Foreign Ministry spokeswoman Hua Chunying didn’t directly address the possibility of talks involving the Justice Department but urged the U.S. to drop its extradition request and called on Canada to allow Ms. Meng to return to China.

The case against Ms. Meng is centered on allegations that she lied to Huawei’s banks during a presentation in 2013 about the Chinese company’s business ties to Iran. The financial institutions subsequently cleared hundreds of millions dollars in transactions that potentially violated U.S. sanctions against Iran.

Lawyers for Ms. Meng told the Canadian court in June that the U.S. made “reckless misstatements” by excluding a portion of her bank presentation that they said cited Huawei’s business in Iran.

In May, a British Columbia judge ruled the U.S. had met a key test to extradite her, but additional hearings are expected to continue later this month and through next year. She is currently on bail and must wear an ankle monitor.

Her arrest touched off a major diplomatic standoff, during which two Canadians, including a diplomat on leave from his post, were detained and charged earlier this year with espionage.

Justin Trudeau
said in June that the detentions of

Michael Spavor
were unacceptable and “deeply concerning not just to Canadians but to people around the world who see China using arbitrary detentions as a means to political ends.”

Mr. Spavor’s family hasn’t spoken publicly about his arrest, and Mr. Kovrig’s wife has said he is innocent.

In recent weeks, China’s Communist Party-run Global Times has specifically identified Ms. Meng’s case as an area on which Beijing hoped to see a shift in posture from the incoming Biden administration.

A former Justice Department national-security official, David Laufman, said that the case was a flagship prosecution and while prosecutors may be weighing geopolitical interests, he doesn’t expect a Biden Justice Department to drop the case.

“It would be exceptional for the Justice Department to forgo a criminal conviction. But there are times when law-enforcement interests reasonably give way to overarching foreign-policy interests of the United States,” said Mr. Laufman, who is now in private practice at the law firm Wiggin and Dana LLP, referring to the Trump administration negotiations. “Given the impact of the Meng prosecution on Canada as well as on U. S-Chinese relations, this may be one of those cases.”

While a deal to effectively free Ms. Meng would likely help ease tensions among the governments, the episode has contributed to a downward trajectory in Canadian views of China, according to public-opinion surveys, in large part because of the detention of the two Canadian men.

“
“There are times when law-enforcement interests reasonably give way to overarching foreign-policy interests of the United States.”
”

China has vociferously denied any direct links between the arrest of Ms. Meng and those of Messrs. Kovrig and Spavor, which occurred within hours of each other in two Chinese cities, nine days after Ms. Meng’s arrest. Chinese diplomats have suggested, however, that resolving Ms. Meng’s case would help in securing the two Canadians’ freedom.

The negotiations to free Ms. Meng with conditions began months before the November presidential election, though they have taken on more urgency in recent weeks as the end of the Trump administration approaches.

The Justice Department’s pursuit of Huawei is part of a broader Trump administration effort against the technology firm. The U.S. has said Huawei could be coerced by Beijing into using its equipment to spy on, or disrupt, foreign networks, which the company has denied.

Prosecutors unsealed new charges earlier this year accusing the company and two of its U.S. subsidiaries of racketeering conspiracy and conspiring to steal trade secrets. U.S. sanctions have limited the company’s ability to obtain crucial chip supplies and encouraged other countries to shun its gear for new 5G mobile communications networking equipment.

On Wednesday, the top U.S. counterintelligence official, William Evanina, said at the Aspen Cyber Summit that the indictment against Huawei had been particularly helpful in persuading European allies to heed U.S. concerns about the technology giant.

L.A. Unified will get 40% of school staff vaccine doses in effort to target neediest areas

Ethics Commission staff were told to soften their advice on gifts, whistleblower says

The road where Tiger Woods crashed has been notorious for decades. Now officials are hoping to fix it

‘I feel abandoned, but I’m not the only one.’ LGBTQ Latinos suffer in the pandemic’s shadows