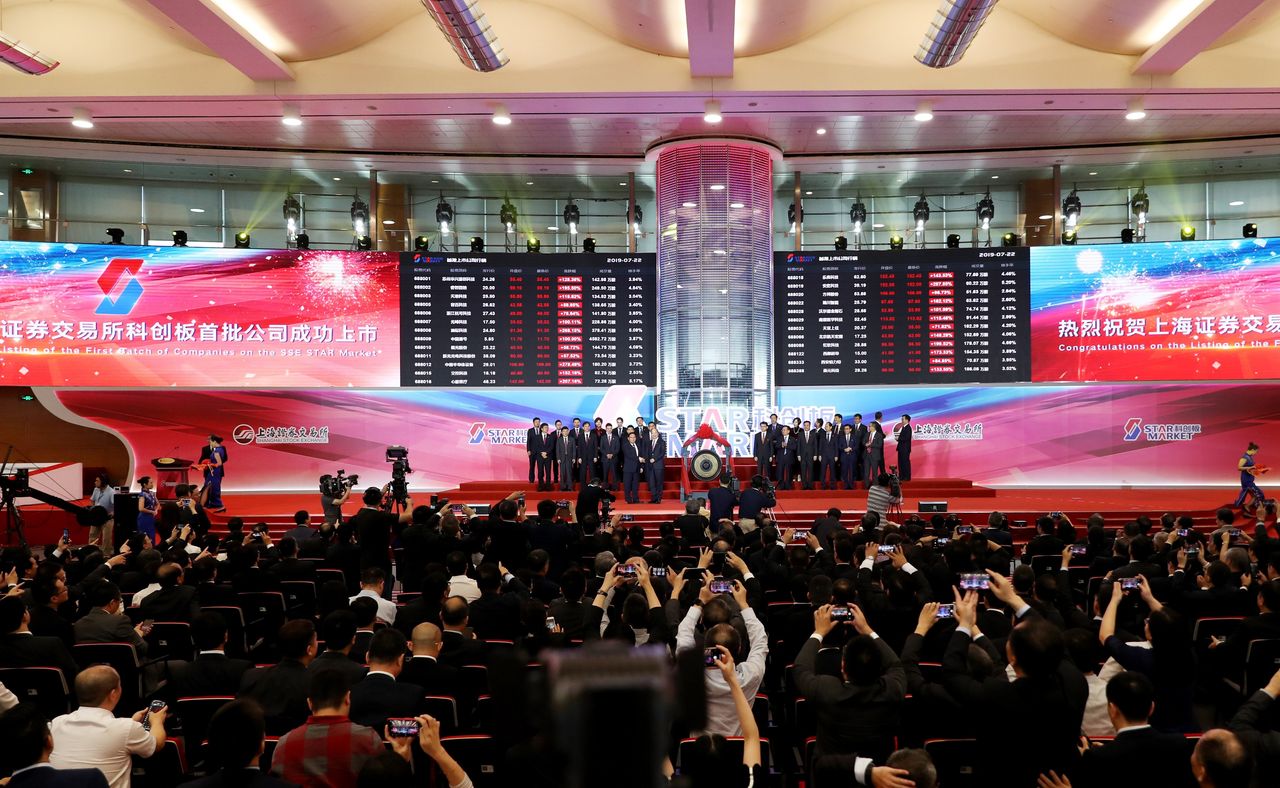 The route to a listing on Shanghai’s once-hot STAR Market has become harder, prompting some startups to favor offshore IPOs over China’s answer to Nasdaq.

The board was launched in 2019 with backing from President

Xi Jinping,
as a fundraising base for China’s homegrown technology champions. With a faster, more market-based process for launching and pricing initial public offerings, it has been host to dozens of hot tech IPOs.

But in recent months regulators have cracked down on problematic IPOs across China. They have also put pressure on big technology companies including

Jack Ma’s
Ant Group Co., which postponed a blockbuster STAR listing in November, and whose speedy IPO approval is under investigation.

The Shanghai Stock Exchange, the board’s parent company, terminated 37 STAR board IPO applications from January through April. That compares with three cases in the same period last year. JD Digits, the fintech unit of e-commerce company
JD.com Inc.
, is one high-profile company that recently withdrew its application.

“Authorities were more tolerant and accepting of a diverse group of listing candidates, but now they’re more stringent in screening applicants and approving deals,” said Shen Cheng, a senior partner at AllBright Law Offices. He said failures by some early STAR listings to hit financial or operational targets had served as red flags. 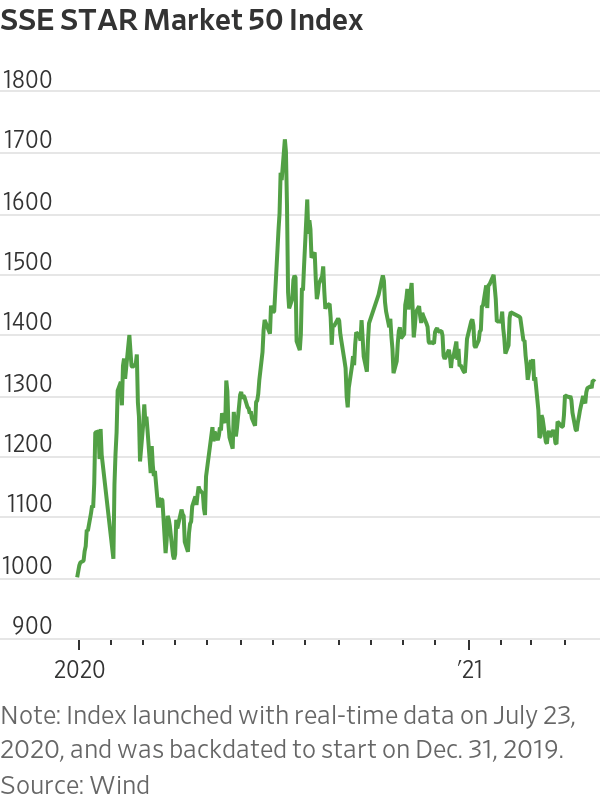 “It used to take an average of six months for a company to get listing approval, but the process has now lengthened to at least nine months,” Mr. Shen said.

In April, the China Securities Regulatory Commission issued revised listing guidelines for the STAR Market, which is also known as the Science and Technology Innovation Board.

The guidelines ban property-, financial- and investment-company listings, and say financial-technology IPOs will be restricted, without specifying what that entails. The guidelines added a requirement to ensure listing candidates have strong research and development functions.

Market-watchers say that weeding out weak candidates and sharpening the focus on core technology such as microchips should benefit the board. At the same time, they say, it is a new example of China experimenting with financial revisions before reasserting tighter control.

Authorities are trying to return the STAR Market to its original intended focus on cutting-edge areas such as semiconductors, biotechnology and artificial intelligence, said Marcella Chow, a global markets strategist at J.P. Morgan Asset Management.

“For those companies also eligible for an overseas listing, some of them have switched their plans to list either in Hong Kong or the U.S. markets, given the relatively more predictable approval process there,” Mr. Sun said.

One such company is DaoCloud Inc., a cloud-computing specialist. Roby Chen, a co-founder, said DaoCloud had planned to list in mainland China because of the sensitive nature of its business, whose clients include state-owned banks and brokers. The company had dismantled a legal setup known as a variable-interest entity structure in preparation for a STAR IPO, he said.  Such structures are used by Alibaba Group Holding Ltd. and many other tech firms to allow foreign shareholders to invest in sensitive sectors. In a VIE, the listed company is registered offshore and relies on contracts to control its operating businesses in mainland China.

“With the revised rules leading to reduced approval visibility, we’re now considering a listing in Hong Kong instead,” Mr. Chen said. He said that would raise funds for overseas expansion or takeovers but didn’t preclude a later listing at home. 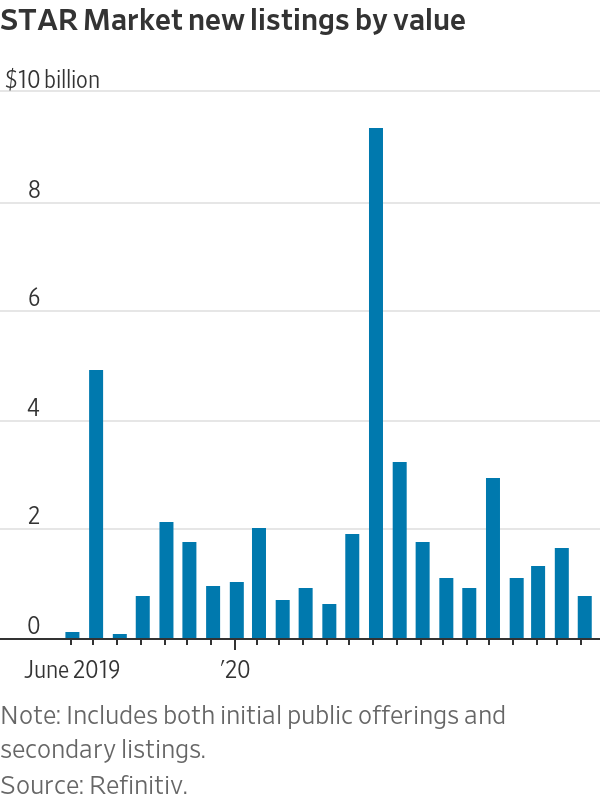 The STAR Market was host to nearly $5 billion in IPOs and secondary listings in the year through April 30, according to Refinitiv, slightly higher than the $4.8 billion in deals in the first four months of 2020. As of the end of April, the board’s STAR 50 index had fallen about 5.1% this year.

Chinese IPOs are broadly under increased scrutiny, as authorities try to prevent shoddy or fraudulent listings. The pressure has extended to the main boards of the Shanghai and Shenzhen stock exchanges and to the tech-heavy ChiNext in Shenzhen, which followed the STAR Market in adopting listing changes.

Leading brokers, including
China International Capital Corp.
,
Citic Securities Co.
and
Haitong Securities Co.
, have been warned to fix shortcomings in their IPO work in areas such as due diligence. CICC and Citic Securities declined to comment. Haitong  didn’t immediately respond to a request for comment.

Since many Chinese technology and internet companies have gone public in the U.S. in the past two decades, mainland banks lacked experience in handling major tech deals, Mr. Liao added.

Yi Huiman,
chairman of the securities commission, warned intermediaries—such as the brokerage firms that underwrite deals—to take more responsibility. “For those who attempt to bring sick companies through the approval process, they will be dealt with seriously,” he said.

Officials are trying to balance liberalization with investor protection, said Ms. Chow at J.P. Morgan Asset Management. “They are trying to prevent any potential risks from problematic applications that could harm investors.”

Write to Joanne Chiu at joanne.chiu@wsj.com