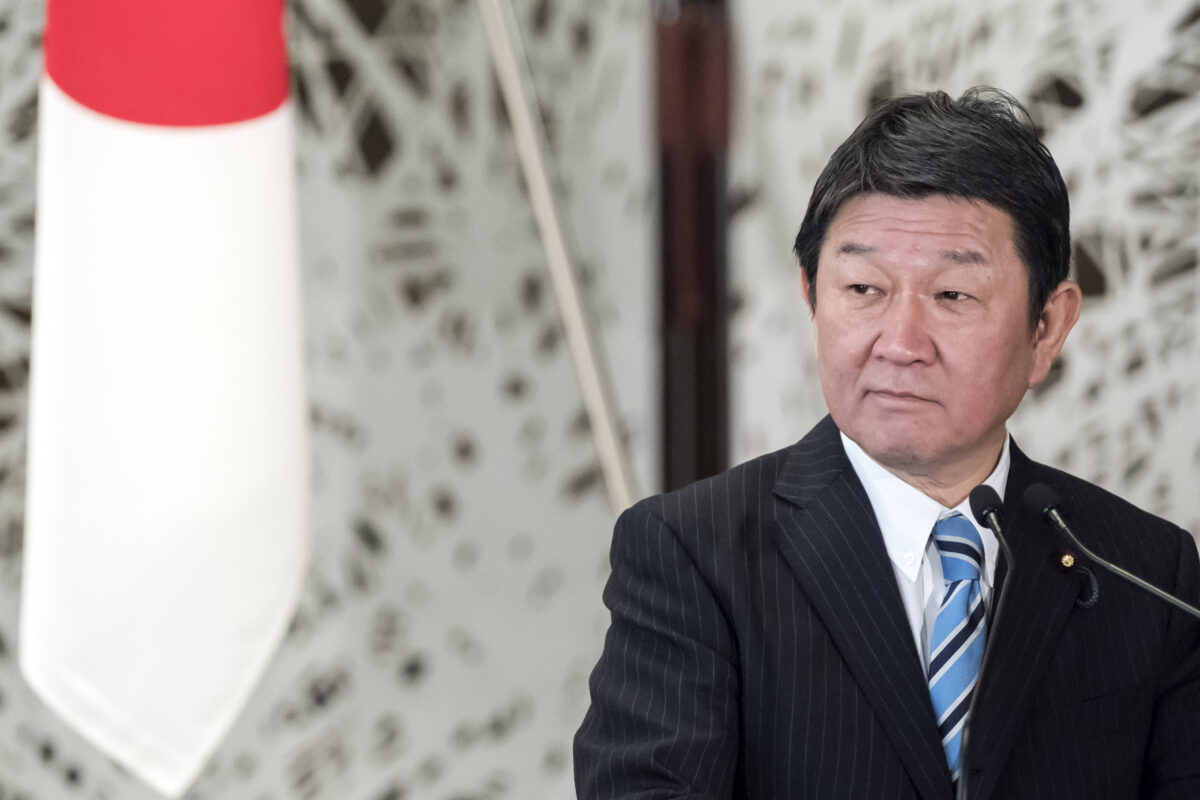 While confirming with Wang the importance of contributing to the region and the international community, Motegi expressed “serious concerns” about the invasion of the Senkaku Islands (also called the Tiao-yu Islands in Taiwan and the Diaoyu Islands in mainland China) by the China Coast Guard, the South China Sea, Hong Kong, and the human rights situation in Xinjiang during the longer-than-expected conversation.

On the Chinese side, however, Wang Yi said that Hong Kong- and Xinjiang-related issues are China’s domestic affairs, hoping that Japan would not be led by countries that stand against the Chinese Communist Party (CCP).

Japan should not stretch its hand “too far,” he said.

Tuesday, just one day later, a cross-party lawmakers’ group on human rights called for a law enabling sanctions for human rights violations at its inaugural meeting.

Akihisa Nagashima, an LDP lawmaker, told the meeting that serious human rights violations are occurring around the world. “The world is focusing more and more on how Japan, whose constitution emphasizes human rights, will respond,” Nagashima added.

Chief Cabinet Secretary Katsunobu Kato also expressed Japan should constantly evaluate the need for its own sanctions law at a news briefing in Tokyo.

It is rare that Japan criticizes China publicly, especially in terms of human rights. For decades, Japan has cautiously maintained its relationship with the communist regime, not causing its neighbor—Japan’s biggest trading nation—to bristle.

However, the Japanese government is increasingly disappointed at and critical of the practices of the CCP in Xinjiang, Hong Kong—and in the disputed waters.

On Feb. 1 of this year, China’s controversial coast guard law took effect, which empowers its maritime law enforcement to open fire on foreign vessels if needed.

Jun Tsuruta, an associate professor of international law at Meiji Gakuin University, believes that the China Coast Guard poses a challenge for Japan because China does not provide a clear definition of its jurisdictional waters in a geographical sense, according to an April 6 article in The Japan Times.

He suspects “China is making claims under its own interpretation of maritime zones beyond what the UNCLOS states” and deems the China Coast Guard as a maritime law enforcement agency and a military agency as well after examining the text of the law in detail.

The UNCLOS stands for the United Nations Convention on the Law of the Sea.

On April 4, Japan’s Ministry of Defense stated that the day before, the Chinese aircraft carrier Liaoning sailed between Okinawa and Miyakojima islands and entered the Pacific Ocean south, the first time that a Chinese ship has crossed the waters since April last year.

On March 16, the U.S. Secretary of State Antony J. Blinken and Secretary of Defense Lloyd Austin visited Japan and had a 2 plus 2 ministerial meeting with Japan’s Foreign Minister Toshimitsu Motegi and Defense Minister Nobuo Kishi in Tokyo.

At the meeting, both sides recognized that China’s behavior, where inconsistent with the existing international order, presents various challenges to the U.S.-Japan alliance and the international community, expressing serious concerns over China’s coast guard law.

Japan is the first destination of the visiting U.S. secretaries’ overseas travel under the Biden administration.