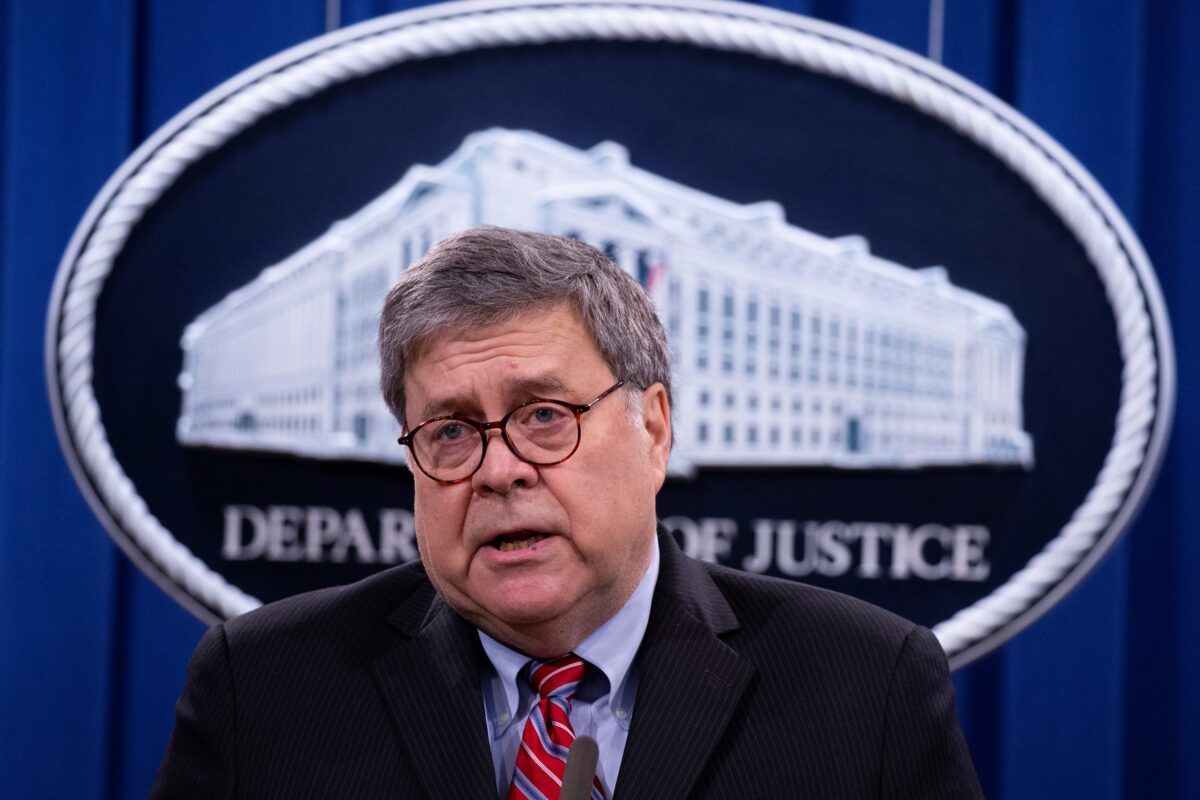 A federal district court judge in Washington has ordered the release of a legal memorandum prepared by the Trump-era Justice Department for then-Attorney General William Barr to assist in his decision on whether to prosecute then-President Donald Trump for obstruction of justice during the Mueller investigation.

The Justice Department had withheld the March 24, 2019 memo claiming that it should be exempt from disclosure under the Freedom of Information Act because it contained private advice of lawyers and was produced prior to any decisions were made.

But U.S. District Judge Amy Berman Jackson, an Obama appointee, rejected the argument, saying that at the time when Barr had received the memo he and the writers had a shared understanding over the decision not to prosecute Trump, and, therefore, the document was not “predecisional.”

“The redacted portions of Section I reveal that both the authors and the recipient of the memorandum had a shared understanding concerning whether prosecuting the President was a matter to be considered at all,” Jackson wrote (pdf), referring to the memo she had reviewed in private.

“The review of the document reveals that the Attorney General was not then engaged in making a decision about whether the President should be charged with obstruction of justice; the fact that he would not be prosecuted was a given.”

She also concluded that the memo represented “strategic, as opposed to legal advice” and would fall outside the scope of the exemption.

The judgment comes in a case brought by Citizens for Responsibility and Ethics in Washington (CREW), a non-profit organization, that had filed a public record request for information Barr had reviewed prior to his public announcement concerning Special Counsel Robert Mueller’s report on allegations that the Trump campaign had colluded with Russia in the 2016 presidential election.

CREW’s request was made after Barr told Congress on April 18 that the evidence produced by Mueller could not sufficiently establish that Trump had committed an obstruction-of-justice offense. Barr said at the time he made the decision after “carefully reviewing the facts and legal theories outlined in the report, and in consultation with the Office of Legal Counsel and other Department lawyers.”

The organization was seeking the documents used in those consultations with department lawyers.

While most of the case has been resolved, at issue were two documents the department argued were exempt from being released to the public.

In a declaration to the court, a DOJ Office of Legal Counsel special counsel Paul Colborn said that the first document referred to as “Document 6″ and described as an “untitled, undated draft legal analysis” had contained OLC legal advice and analysis as well as confidential client information.

Colborn also explained that the DOJ withheld portions of the March 24, 2019 memo because it contained “advice and analysis supporting a recommendation regarding the decision [Barr] was considering.”

Jackson agreed that “Document 6” was withheld appropriately but concluded that the March 24, 2019 memo was not.

“The Court’s in camera review leads to the conclusion that the agency has fallen far short of meeting its burden to show that the memorandum was ‘prepared in order to assist an agency decisionmaker in arriving at his decision,’” she wrote.

Jackson has given the DOJ until May 17 to produce the document. The Justice Department did not immediately respond to The Epoch Times’ request for comment on whether it was considering options to stay the order.

This case is Citizens for Responsibility and Ethics in Washington v. U.S. Department of Justice (Docket number: 1:19-cv-01552).