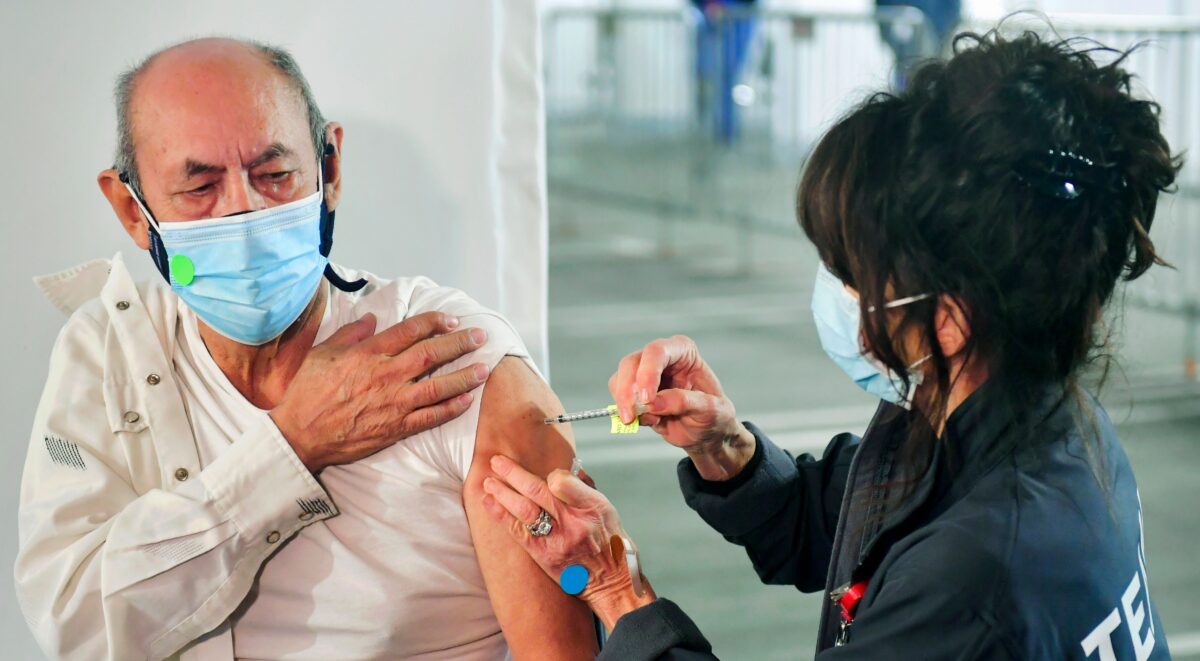 A “double mutant” strain of the CCP virus believed to be behind a spike of cases in India has been discovered in California’s Bay Area, officials confirmed Sunday.

The first case of the variant, which is feared to be more infectious, was identified and confirmed by the Stanford Clinical Virology Lab through genetic sequencing, Stanford Health Care spokesperson Lisa Kim told the San Francisco Chronicle.

Stanford is also screening seven further presumptive cases of the “double mutant” strain, which carries two mutations in the spike protein—L452R and E484—that may help the virus bind more readily to receptors in human cells.

It is unclear whether the emerging strain is more resistant to the three COVID-19 vaccines that have been authorized for emergency use in the United States so far—Pfizer/BioNTech, Moderna, and Johnson & Johnson.

Dr. Benjamin Pinsky, who leads the Stanford Clinical Virology Lab, confirmed in an interview with ABC 7 that the “double mutant” strain includes in its spike protein the L452R mutation, which is found in the California variant, and the E484 mutation that’s found in the South Africa and Brazil variants.

Chin-Hong described the variant as “less forgiving,” noting that it accounts for a fifth of COVID-19 cases in India’s Maharashtra state, although India’s Ministry of Health and Family Welfare has said the number of cases isn’t yet sufficient to establish a direct relationship “or explain the rapid increase in cases in some States.” Maharashtra state seen a 50 percent surge in COVID-19 cases in the last week alone.

“Since we know that the domain affected is the part that the virus uses to enter the body, and that the California variant is already potentially more resistant to some vaccine antibodies, it seems to reason that there is a chance that the Indian variant may do that too,” Chin-Hong added.

“It also makes sense that it will be more transmissible from a biological perspective as the two mutations act at the receptor-binding domain of the virus, but there have been no official transmission studies to date.”

He said that he was “optimistic” that COVID-19 vaccines would be effective against the “double mutant” strain, as data has shown efficacy against variants that first emerged in South Africa and California.

“I, in my heart of hearts, believe that the vaccines will still be effective against this new Indian variant based on some of the information we’ve been getting about the even scary variants, like the South Africa variant, and how Pfizer’s vaccine is actually effective against it,” the infectious disease expert told FOX 2. “The sun is shining over California, our cases are down. We’ve made great progress. But, we need to be safe, we need to keep our guard up.”

It polled 77 experts from top academic institutions from 28 countries, of which nearly a third of respondents said that they believe current vaccines could be rendered useless within nine months.

Some believe that COVID-19 booster shots may be needed in the future as variants emerge.

“The concept of COVID-19 ‘booster shots’ after initial vaccination is a reality we should accept,” Dr. Robert Glatter, emergency physician at Lenox Hill Hospital in New York, told Healthline.

“With the inevitable rise of variants, we will need to continually update COVID vaccinations such that an annual booster shot will be required in the foreseeable future,” he said.