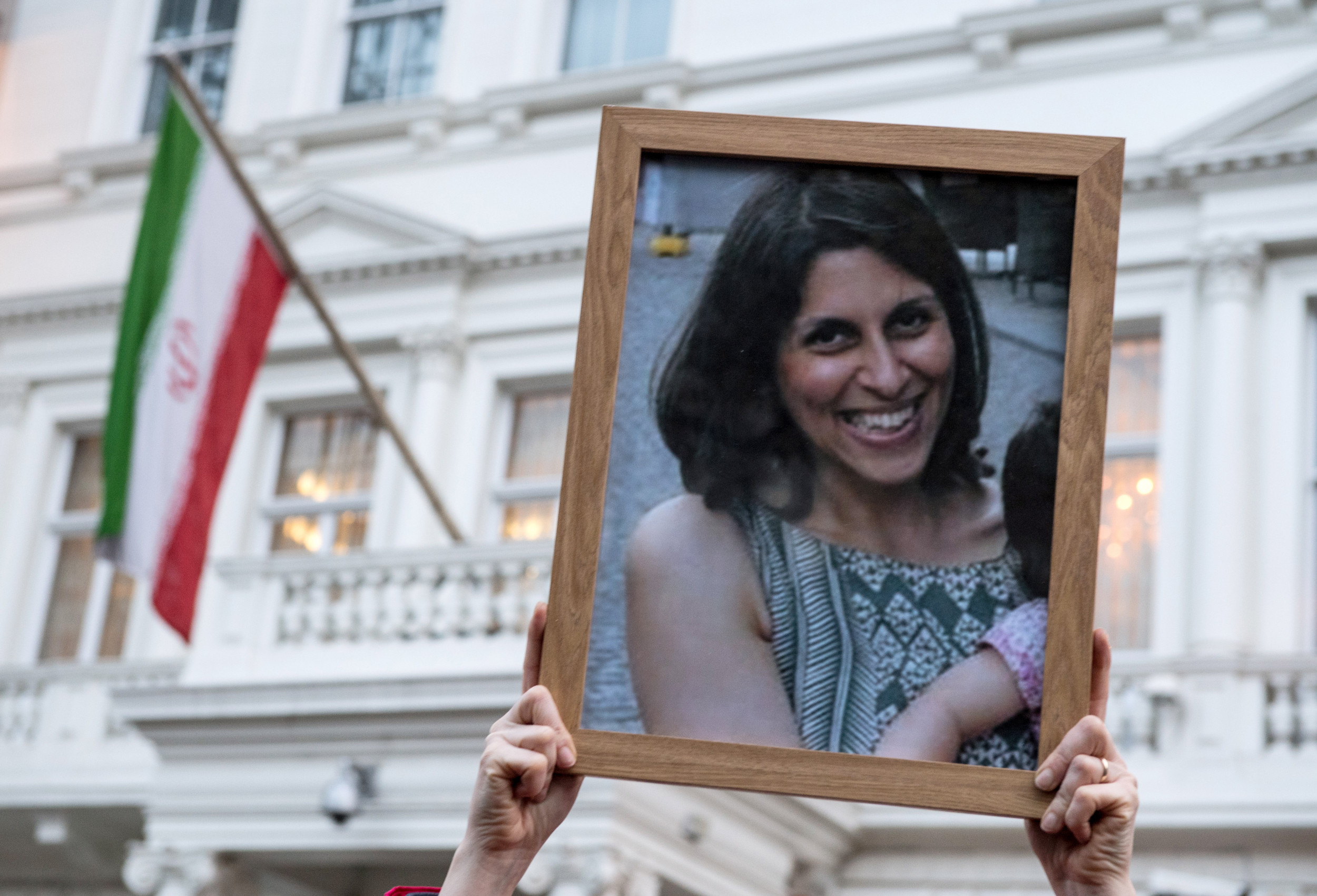 What is Nazanin Zaghari-Ratcliffe‘s real story, a dual national British Iranian, who has been in detention in Tehran since her arrest on April 3, 2016?

She is accused of spying—a charge she denies. Hopes of her release were once again dashed when the Iranian regime recently announced that she would remain one more year in a Tehran jail and a further year under house arrest.

For some, this may seem to have been an odd and somewhat baffling strategy for the Iranians to play, given that they are in the midst of negotiations with mainly the West over a new, so-called Iran deal, which would scale back their nuclear capabilities in return for the lifting of sanctions.

Yet others might argue that this is a deft move by the Iranian regime. The West has so much to lose by Iran plowing ahead and producing weapons-grade uranium and Iran has so much to gain.

At the negotiating table in Vienna, the chips are stacked up on Iran’s side—largely by the fact that U.S. sanctions—chiefly secondary sanctions imposed on countries like Turkey, South Korea, Japan and India—had such an impact initially, that it only strengthened the hardliners’ mandate. The moderates have lost the argument in Tehran that it is to Iran’s advantage to work with the West, given that the U.S. in particular bankrupted the regime, destroyed the economy and practically forced Iran to produce enriched uranium to catch up with its previous stockpiles lost when it signed the Joint Comprehensive Plan of Action (JCPOA).

The only deal worth looking at for the Iranians is for U.S. sanctions to be lifted unconditionally, immediately. And even that deal on its face is not as great as one might think, given that it is the secondary sanctions which will probably not be enforced so vociferously by the Biden administration.

This is what Western commentators don’t understand. They don’t realize that Iran, by playing hard to get, is in a win-win situation now and there is less wiggle room than there was leading up to the original deal being signed in 2015. Iran has been burned by the U.S. and it is for America to make the grand gestures if it wants to be taken seriously.

But America isn’t making any such gestures which signals to Tehran that it should forget about any such deal and accelerate its uranium program until the magic number of production creates even more leverage—a new crisis on President Joe Biden‘s doorstep.

What gestures could the U.S. take? Or from which allies could they be made?

Should Biden reach out to U.K. Prime Minister Boris Johnson to make such a gesture to Iran?

Here’s where news of Nazanin Zaghari-Ratcliffe becomes relevant: The BBC recently announced that talks between Iran and the U.K. are underway.

The back story to this, is that Iran is signalling to Boris Johnson that he can pull off a double-whammy by giving his relations with Biden a further boost and help the talks in Vienna by securing the release of the dual national.

Yes, Johnson himself can do this as not only is he partly responsible for Zaghari-Ratcliffe’s detention (he told a U.K. parliamentary committee in 2017 that she was held by Iran because she was teaching Iranians journalism), but he alone can sign off a decision to pay back to Iran around $500 million that it owes the government through a U.K. arms deal which the British didn’t deliver on in 1979, just before the shah fled the country and the revolution began.

As the talks progress in Vienna and the Biden camp offers both an investment deal while wanting to retain a number of key sanctions, it’s a payment from the U.K. that might be a deal breaker. Barack Obama, when in office, paid Iran $1.7 billion dollars as compensation for an almost identical deal involving military hardware not delivered. The original sum was $400 million but the former U.S. president adjusted it for inflation.

Johnson should do the same as there is a very real threat that the Iranians might hold out for the same sum, or worse, agree to a deal with the U.S. and leave Zaghari-Ratcliffe’s case unresolved.

It’s unlikely that Zaghari-Ratcliffe was teaching Iranians journalism but her previous work for BBC Persian put the jitters up the regime and made her an easy target in its war with the West—which the cruel sanctions started in the first place. Tehran is arresting Westerners as part of its tactic to give itself leverage in such talks. Who can blame them?

How hypocritical and imperialistic of the West to look down on the Iranians for this style of negotiating, when they were so horrendously cheated by the West in the first place? And what rank hypocrisy of the British government to this day to not pay them the money back for British tanks which were not delivered to them. Does the U.K. really hold the high moral ground on keeping Iran’s money when it should have done the right thing, which America did, and hand it back?

If Johnson were to step in and make this offer, for the release of Zaghari-Ratcliffe, this might send the right signal to Tehran to be more cooperative in talks. It might restore lost faith to negotiations which are presently cursed by the Iranians thinking they are talking with the mafia rather than, essentially, the Biden administration.

Trust needs to be restored and it is stupendously arrogant of the Americans and the British that the Iranians are the ones who need to make the first move. The Iranians are, after all, the victims of being robbed and assaulted. It is London and Washington who carried out those crimes and no matter how many times Western mainstream press keeps feasting itself on this gift of the Zaghari-Ratcliffe case, history will not be re-written by this obvious distraction, which you might call fake news.

Yes, it is appalling the conditions that Zaghari-Ratcliffe is in and what she and her family are facing. But how can we judge the Iranians on her circumstances and not consider Britain and America’s role in how Tehran got to where it is today?

Martin Jay is an award-winning British journalist previously based in Beirut, Lebanon. His career has included working for CNN, Euronews, The Sunday Times, BBC, DW, TRT, RT, Al Jazeera and Reuters. He currently lives in Morocco, where he is a correspondent for the Daily Mail. He can be followed on @MartinRJay.