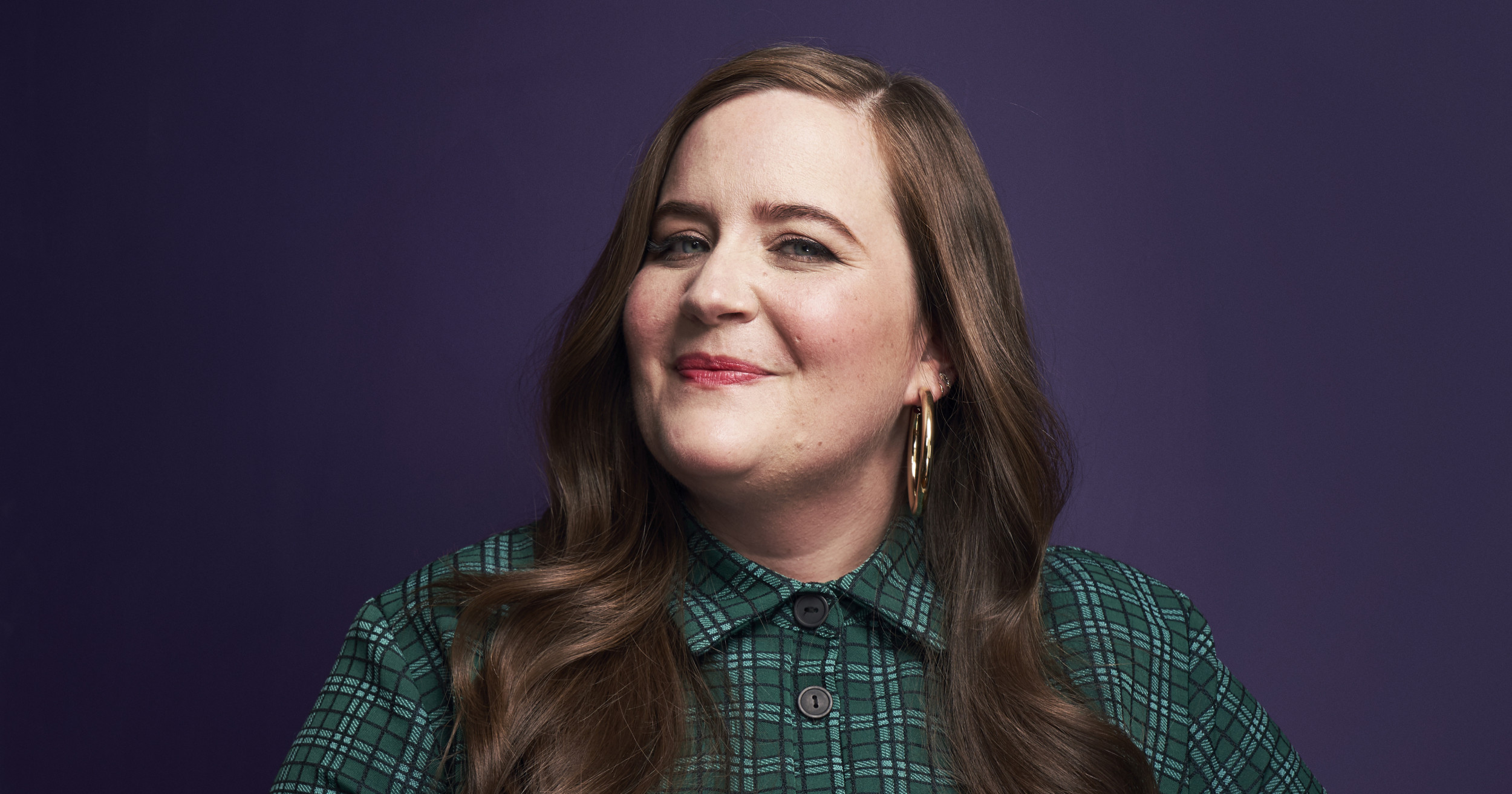 “I feel really proud that we gave a fat character a lot of dignity. We never saw her get on a scale and sigh.”

Saturday Night Live‘s Aidy Bryant is very busy; when she’s not brilliantly portraying characters on SNL, she’s producing and starring in Shrill on Hulu (final season premieres May 7). “There’s a lot of juicy new fun,” Bryant says about the season. Based on the bestselling book by Lindy West, Bryant plays Annie, a plus-size woman on a mission of personal growth that has nothing to do with her size. “I feel really proud that we gave a fat character a lot of dignity.” Like her character, Bryant says she too made an active choice to not lean into shame. “In college, I was kind of like, ‘Oh I see these cool young women who are not hating themselves, and I want to be like that.’ Things got quite a bit better for me and it was mostly because I was less hard on myself.” She sees positive changes at SNL, too. “When I first started, it wasn’t as typical to see women play men. It kind of opens up this freedom of just who’s got the vibe and who can do it.” Watch her as Ted Cruz and there’s no doubt about it: she can do it.

What can people expect from the final season of Shrill?

It is like this character piece in a lot of ways, where it’s about this transformation. I think Lindy and myself both experienced starting from this place of “I’m wrong, I hate myself in all these ways.” I think this final season gets her to a better place. There’s a lot of juicy new fun because she’s finally rid of Ryan [played by Luka Jones] and taking herself out on the town and being okay with “What if I actually put myself out there without diminishing myself and hating myself at every single turn and trying to put a little fire behind my engine?”

How do you relate to her or her struggles?

I relate to so much of it. It’s more like what do I not relate to? I feel like people are finding, in all different places but especially in the ’90s and early 2000s, there was just such a narrow stance on what was “good.” Including things like whiteness, straightness, there are just so many examples of it, and I think there is a way to sort of shift your mind and be like “I don’t agree with that, and I’m actually okay with not fitting in that really narrow box.” That’s such a mental shift because it takes time to change the culture but you can decide what you find valuable and that’s so much of what I relate to in these characters. Deciding to be fed up and deciding to actively try and change your line of thinking. That touches every single place: work, home, love, friendships, all of it, and that fully happened to me. When I was in college I was kind of like, “Oh I see these cool young women who are not hating themselves, and I want to be like that. What if I try?” Then I was hired by Second City, I met my husband and it was like a light switch flipping on. Things got quite a bit better for me, and it was mostly because I was less hard on myself.

One of the things I love about Shrill is how authentically inclusive the show is. Was that important to you?

We just want to reflect what our worlds look like and not try and put it in some kind of box. Ultimately so many of the people who are in the cast are people who we knew and who are just super talented comedians. Either I knew them from New York or a lot are Chicago comedians who I knew there. So our casting was just a natural progression. I think that’s part of why it feels like such a nice ensemble show, we’re all in this comedy community together. I don’t want to say it wasn’t an active choice, of course, but it also wasn’t a directive.

With Annie’s story coming to an end, what do you hope people take from the series?

I think, to me, the message is it’s never a win, you never get an A-plus in this area. It’s always this ever-evolving thing. These kinds of challenges about self-confidence or self-worth are going to continue to present themselves for the rest of your life. The only thing you can change is how you approach them and how you deal with it. I would say that’s maybe the thing I hope people take away from it. The number one thing I hear over and over again is how meaningful it was for people to see a fat person in the lead of a show, who had a fully dynamic life that was sexual and a person with goals and not this cartoonish big cardigan-wearing slob. I feel really proud that we gave a fat character a lot of dignity. We never saw her get on a scale and sigh. I think that’s important to see.

Why is the fat character always the baggy cardigan-wearing mom?

Totally. I mean, I play a lot of moms on SNL. I think people see you that way. I was like 25 when I started on SNL, but I was immediately the mom. I was like, “I think this is because I’m a size 18 and not because I’m 25.” But it’s good, it’s like, that’s a piece of a nurturing nature or whatever. I’m happy to be that, too.

You exec-produced Shrill. Do you have criteria for the types of projects you look to produce?

I’ve kind of already started working on a couple of little things. I wouldn’t say there’s one defining factor, but a lot of them are about non-traditional leads or people who experience some form of self-loathing and how that transforms them—whether it be positive or negative or pushes them to do things. There are themes about my life that I can’t escape on some level, even as I approach producing other things. I’m like, “Well, that’s what I connect with.”

You, Kate McKinnon and Cecily Strong quickly became the new Tina Fey, Amy Poehler and Maya Rudolph on SNL. Over the years have you seen a change in the type of sketches that make it to air?

On some level, it’s the change of being a new person versus being a veteran. I do feel like I grew up watching SNL and definitely noticed that if there was a fat female character, it was probably going to be played by a man, usually as a joke. When I first started, it wasn’t as typical to see women play men. That’s something we’ve really done on the show and it kind of opens up this freedom of just who’s got the vibe and who can do it. Also, a lot of those casts early on, it was like two women, three women and for the bulk of my time on the show, it’s been at least five women or seven women. That has been really cool. Same with the writer’s room, we have a female head writer right now, that wasn’t exactly the case as much when I first started.

Do you have plans to release a Lil’ Baby Aidy album and if not, why? Because it’s very much so needed.

I really don’t [laughs]. It’s so funny because when I first started on the show it was kind of like little baby Aidy because I was kind of the baby of the cast. Sometimes I’ll be on a plane or something and someone will be like “Lil’ Baby Aidy!” and I’m like, “No, I’m a 33-year-old woman with like four bags and in America’s biggest jacket. Like, I’m not Little Baby Aidy, but I’m touched that you see that.”