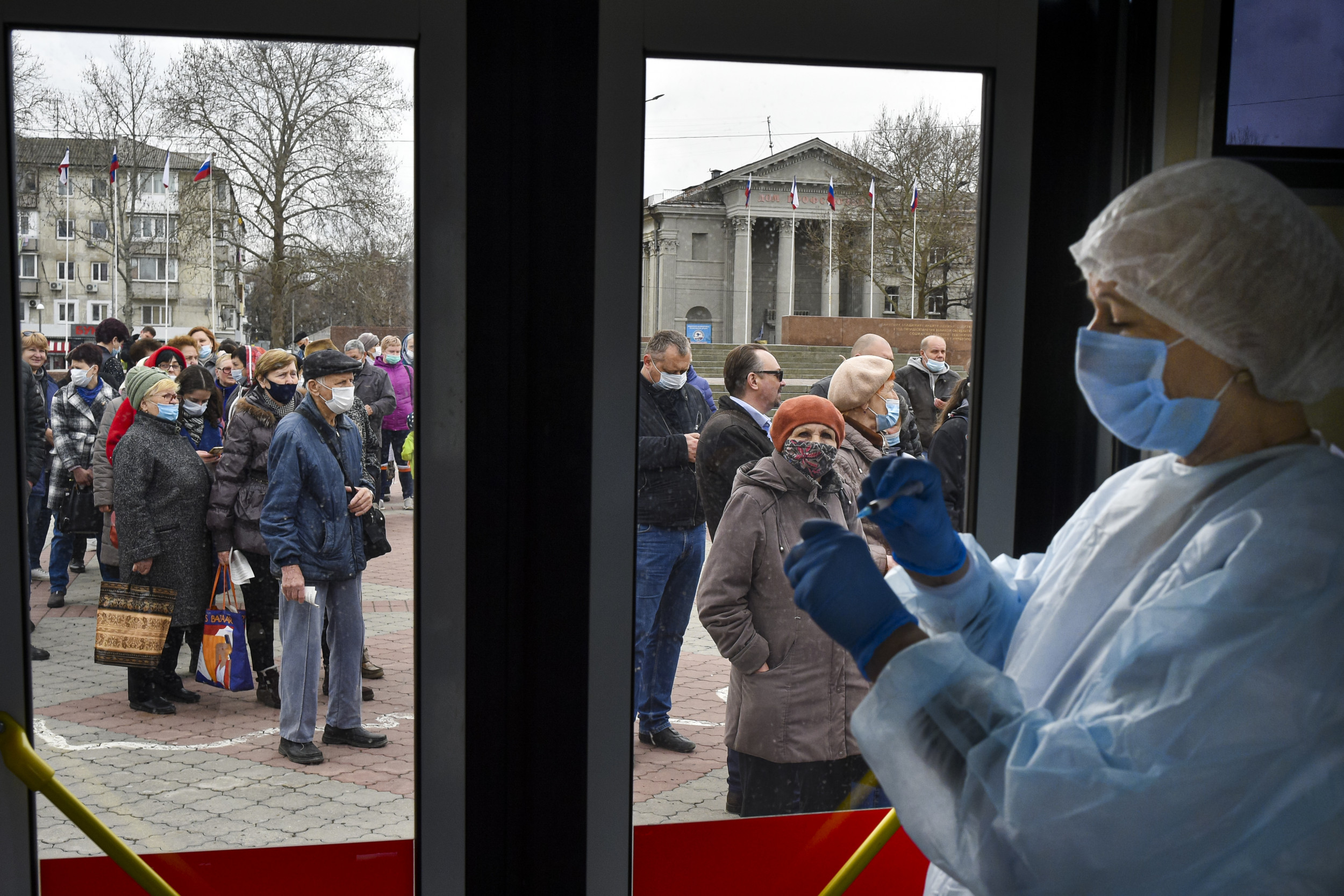 A year after touting the authorization of its own coronavirus vaccine ahead of the rest of the world, Russia is struggling to convince its citizens to inoculate themselves, so Moscow is paying some people to get the Sputnik V shot.

Officials are offering $13 coupons (1,000 rubles) to Russians over 60 who get the vaccine in an attempt to inflate demand, according to the Associated Press. In a country where members of this population receive monthly pensions of just $260 (20,000 rubles), the stipend is a substantial incentive.

But not incentive enough. Older Moscow residents told AP that the coupons were difficult to register for online and that many grocery stores would not accept them.

Only about 5% of Russia is fully vaccinated despite it being the first country to authorize a vaccine. As Moscow’s deadline to vaccinate more than 30 million of 146 million people by mid-June looms, reaching those ambitious numbers looks less than hopeful.

While at the Park House shopping mall in northern Moscow, Vladimir Makarov saw it was offering the coronavirus vaccine to customers, so he asked how long it would take.

“It turned out it’s simple here—10 minutes,” he said of his experience last month.

But Makarov, like many Muscovites, still decided to put off getting the Sputnik V shot.

The vaccine reluctance comes as shots are readily available in the capital to anyone 18 or older at more than 200 state and private clinics, shopping malls, food courts, hospitals—even a theater.

As of mid-April, over 1 million of Moscow’s 12.7 million residents, or about 8%, have received at least one shot, even though the campaign began in December.

Dragan, who tracks vaccinations across Russia, said last week the country was giving shots to 200,000 to 205,000 people a day. In order to hit the mid-June target, it needs to be nearly double that.

Other regions also are offering incentives. Authorities in Chukotka, across the Bering Strait from Alaska, promised seniors 2,000 rubles for getting vaccinated, while the neighboring Magadan region offered 1,000 rubles. A theater in St. Petersburg offered discounted tickets for those presenting a vaccination certificate.

Russia’s lagging vaccination rates hinge on several factors, including supply. Russian drug makers have been slow to ramp up mass production, and there were shortages in March in many regions.

So far, only 28 million two-dose sets of all three vaccines available in Russia have been produced, with Sputnik V accounting for most of them, and only 17.4 million have been released into circulation after undergoing quality control.

Waiting lists for the shot remain long in places. In the Sverdlovsk region, the fifth most-populous in Russia, 178,000 people were on a wait list by mid-April, regional Deputy Health Minister Yekaterina Yutyaeva told AP.

On April 28, Kremlin spokesman Dmitry Peskov said there are enough vaccines available in Russia, adding that demand was the defining factor in the country’s vaccination rate.

Another factor in Russians’ reluctance over Sputnik V was the fact that it was rolled out even as large-scale testing to ensure its safety and efficacy was still ongoing. But a study published in February in the British medical journal The Lancet said the vaccine appeared safe and highly effective against COVID-19, according to a trial involving about 20,000 people in Russia.

A poll in February by Russia’s top independent pollster, the Levada Center, showed that only 30% of respondents were willing to get Sputnik V, one of three domestically produced vaccines available. The poll had a margin of error of 3.4 percentage points.

Dragan, the data analyst, said one possible explanation for the reluctance is the narrative from authorities that they have tamed the outbreak, even if that assessment might be premature.

With most virus restrictions lifted and government officials praising the Kremlin’s pandemic response, few have motivation to get the shot, he said, citing an attitude of, “If the outbreak is over, why would I get vaccinated?”

Vasily Vlassov, a public health expert at the Higher School of Economics in Moscow, echoed Dragan’s sentiment and also pointed to inconsistent signals from officials and media.

“Russians in 2020 were bombarded with contradictory messages—first about (the coronavirus) not being dangerous and being just a cold, then that it was a deadly infection,” he told AP. “Then they were banned from leaving their homes.”

Another narrative, he said, was that foreign vaccines were dangerous but Russian-produced ones were not. State TV reported adverse reactions linked to Western vaccines while celebrating Sputnik V’s international success.

A proper media campaign promoting vaccinations didn’t begin on state TV until late March, observers and news reports note. Videos on the Channel 1 national network featured celebrities and other public figures talking about their experience but didn’t show them getting injected. President Vladimir Putin said he received the shot about the same time, but not on camera.

“Fruitful ground for conspiracy theorists,” said Dragan, who also works in marketing.
Rumors about the alleged dangers of vaccines actually surged on social media in December, when Russia began administering the shots, and have continued steadily since then, said social anthropologist Alexandra Arkhipova.

The rumors combined with other factors—the pseudoscience on Russian TV, vaccine distribution problems and an uneven rollout of the promotional campaign—to hamper the immunization drive, Arkhipova told AP.

Vlassov, meanwhile, noted the outbreak in Russia is far from over, and there even are signs it is growing.

“Roughly the same number of people get infected every day in Russia now as last May, at the peak of the outbreak,” he said, adding that twice as many people are dying every day than a year ago.

Government statistics say infections have stayed at about 8,000-9,000 per day nationwide, with 300 to 400 deaths recorded daily. But new cases have been steadily increasing in Moscow in the past month, exceeding 3,000 last week for the first time since January.

Infection rates are growing in seven regions, Deputy Prime Minister Tatyana Golikova said on April 23, without identifying them. She blamed “insufficient vaccination rates” in some places.

And yet, the abundance of vaccines in Moscow has attracted foreigners who can’t get the shot at home. A group of Germans got their first jab at their hotel last month.

Uwe Keim, a 46-year-old software developer from Stuttgart, told AP he believes “there are more vaccines available here in Russia than is demanded by the people here.”