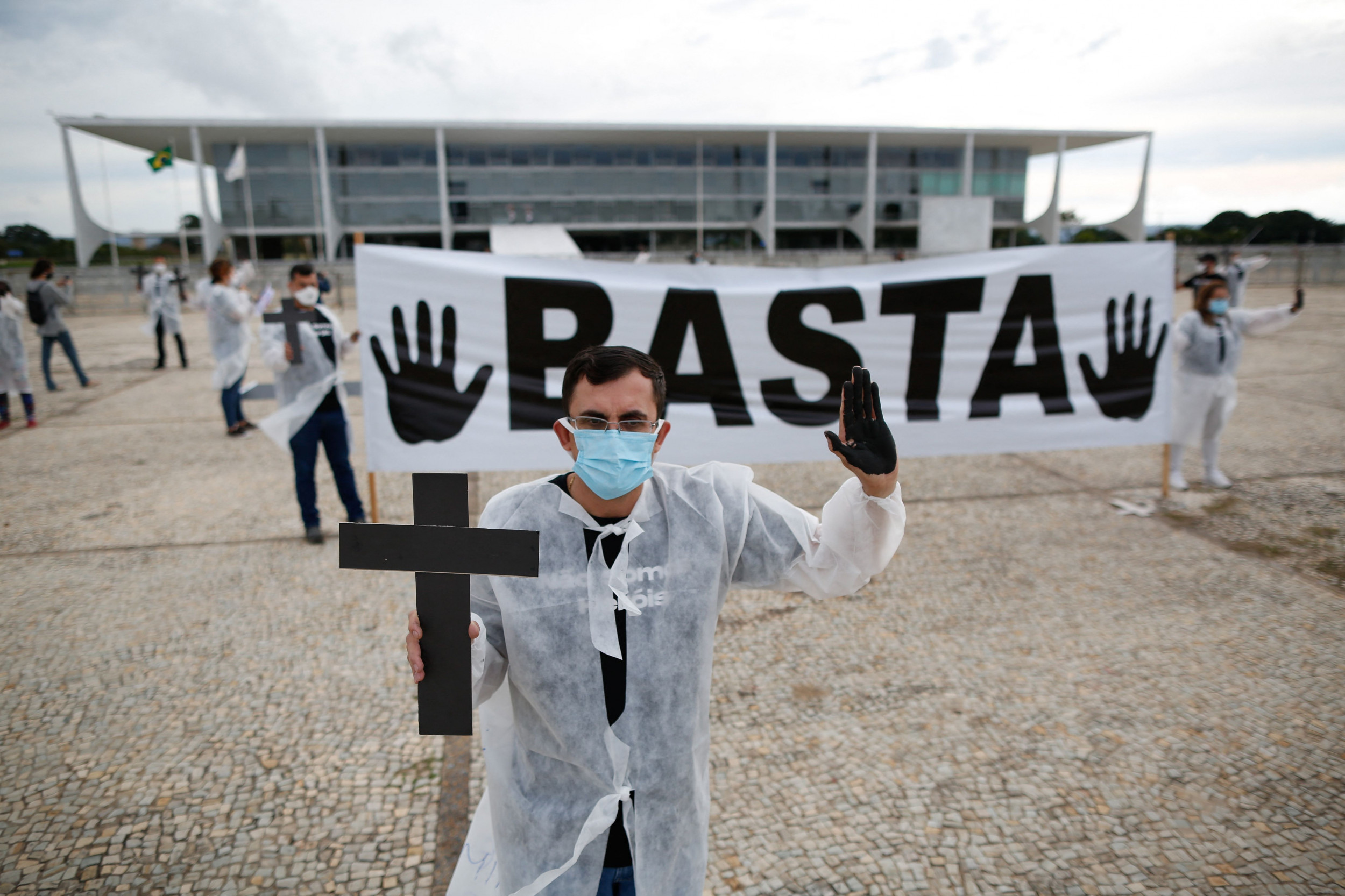 Brazil is now ground zero for COVID-19 mortality rates. With over 400,000 deaths, it surpassed the U.S. death toll. The country’s over 3,000 daily deaths collapsed the health care system. Twenty-four hour funerals are the norm. Highly contagious variants continue to spread unchecked and mutate. Despite all this, Brazilian President Jair Bolsonaro continues to oppose public health advice and upend local efforts to contain the virus.

Like the U.S., COVID-19 is exacerbating racial disparities in Brazil. Afro-Brazilians are 38 percent more likely to die of COVID-19 than white Brazilians. Pregnant and postpartum Afro-Brazilian women die from COVID-19 at twice the rate of white women. And the mortality rate of Indigenous populations in the Amazon due to COVID is 32 percent higher than the general population. Bolsonaro’s rejection of COVID-19 pandemic mitigation measures is massacring Afro-Brazilian and Indigenous peoples in horrifying numbers.

These deaths are not happenstance or inevitable. The current suffering and death of Afro-Brazilian and Indigenous communities is part of a long history of systemic racism in the country. Racial violence dates back to the Portuguese colonization of Brazil and the transatlantic slave trade. The military dictatorship, which Bolsonaro admires and under which he served as a member of the armed forces, attempted to eradicate Afro-Brazilian and Indigenous organizing. Now, Bolsonaro’s presidency is continuing the assault. COVID-19 is the latest weapon.

The end of pandemic emergency aid also threw Brazilians into deeper poverty. Afro-Brazilians earn substantially less than white Brazilians and are more likely to be employed in informal labor, working as housekeepers or street vendors. Afro-Brazilians already suffer from adverse health outcomes due to structural racism.

Despite such staggering racial inequities, Brazil invested in the myth of racial democracy since the 1930s. Racial democracy is based upon the idea that Brazil’s extensive racial mixture makes race and racism obsolete. Due to the historical lack of legal segregation, Brazil presents itself as a model of racial harmony. This ignores the reality on the ground.

Before the pandemic, Bolsonaro was using the traditional powers of the government to harm Afro-Brazilian and Indigenous peoples in the country. Open murders of Indigenous leaders and environmental destruction soared. Increased police impunity targeting Afro-Brazilian communities led to a stark increase in police killings, where 75 percent of victims were Afro-Brazilian.

In response to such allegations, Bolsonaro dismissively remarked, “They called me homophobic, racist, fascist, a torturer and now … what is it now? … Genocidal.” But genocidal is precisely the right term.

White patriarchy is the foundation of Bolsonaro’s platform. His two predecessors, Presidents Luiz Inácio Lula da Silva and Dilma Rousseff chipped away at the myth of racial democracy. Both were punished for it on dubious charges—Rousseff with impeachment and Lula with imprisonment. Backlash to this social mobility is precisely what set the stage for Bolsonaro’s presidency. Once in office, Bolsonaro delivered, repealing gains for Afro-Brazilians, Indigenous peoples, women, the LGBTQ+ communities and the poor.

Now, Bolsonaro’s dangerous presidency has taken a new turn with the pandemic and this time the consequences are global.

The U.S. is a major trade partner with Brazil. It should offer vaccines to help quell the pandemic. The U.S. should also pressure Brazil to install a national coordination plan to mitigate the pandemic. But vaccines and political pressure are not enough.

To foster equity, the U.S. should use its cultural, political and social influence to aid international organizations and civil society organizations fighting back, with a focus on organizations that support Afro-Brazilian and Indigenous communities. Bolsonaro can not be allowed to use U.S. vaccine aid to bolster his destructive presidency. Instead, there should be a focus on the communities disproportionately impacted by the pandemic.

Like American organizers in the age of Donald Trump, coalitions of Black, Indigenous and feminist organizers can confront far-right coalitions in Brazil. While worldwide control of the pandemic is of international interest, the U.S. must not sacrifice a commitment to equity.

Bolsonaro’s racist and misogynist regime threatens global health security. The battle against racism is just as important on the streets of Minneapolis as it is on the streets of Rio de Janeiro. The United States and Brazil need to work on the scourge of racism together. All of our lives depend on it.

Jasmine Mitchell is an associate professor of American studies and media studies at the State University of New York-Old Westbury. She is the author of Imagining the Mulatta: Blackness in U.S. and Brazilian Media. She is also a member of the Scholars Strategy Network.