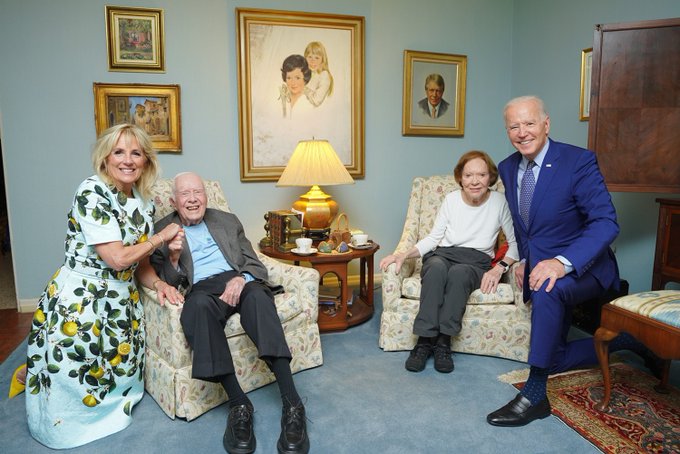 A bizarre photo of President Joe Biden and First Lady Jill Biden meeting with former President Jimmy Carter and his wife, Rosalynn, has raised eyebrows, with many questioning why the Bidens appear to be so large compared to the Carters.

The Carter Center shared the photo on Twitter and said: “We’re pleased to share this wonderful photo from the @POTUS and @FLOTUS visit to see the Carters in Plains, Ga.! Thank you President and Mrs. Biden!”

The Bidens visited the Carters on Thursday to mark Biden’s 100th day as president. The meeting was also the first time the two couples had met since Biden became president, as the former president and his wife did not attend the inauguration in January because of COVID-19.

CNN reported that before leaving Georgia, Biden said: “It was great to see President Carter.

“It reminded me that I was the first person to endorse him outside of Georgia. And we sat and talked about the old days and he introduced me to a friend of his, a reverend he wanted me to get to know, and Rosalynn was great, too. We just had a nice time. We’re old friends.”

The Carter Center shared a photo of the visit on Monday night, and its bizarre optical illusion has people baffled at the proportions. Jimmy Carter is reported to be 1.77m tall while Joe Biden is 1.82m tall, but even if Carter had grown shorter in old age, the photo would suggest that Biden is taller than Carter by much more than five centimeters.

Twitter user @sistercelluloid said: “We voted for Biden because he’s a decent human being with sound policies but also because he and Jill are giants who will crush you if you make them angry,” while @ajsugrue said: “At least one of the following things is true: 1) the Bidens are 9 feet tall, 2) the Carters are 3 feet tall, or 3) I’m losing my mind.”

Writer Abigail Weinberg said she was, “absolutely transfixed and perplexed by this photo. how are the carters so tiny. why does the room look like a dollhouse. how is this real. blog tk.” Actor Vincent Martella said: “i can’t stop laughing at big bidens and baby carters.”

Twitter user @DeonardoLeVinci shared the photo edited to make the Carters appear larger than the Bidens and said: “There. I fixed it.”

But why do the Bidens appear to be giants next to the Carters? Some people have pointed out that the Carters are smaller than the Bidens due to their age while others think that the difference in size is emphasized by the way the photograph was taken, which resulted in an optical illusion.

Social media users have shared theories such as the photographer who shot the photo used a wide-angle lens in a tight space, which can distort the proportions of an image. Additionally, if the Bidens are leaning forwards, while the Carters are leaning back in the chairs, the distortion may be emphasized, making the Bidens appear larger.

One Twitter user shared the photo edited to fix the proportions and said: “My guess is the room was very small, so they had to use a wide-angle lens to get everyone in. The choice of lens was correct, but someone should’ve fixed the distortion in photoshop before releasing it. Something like this, maybe?”