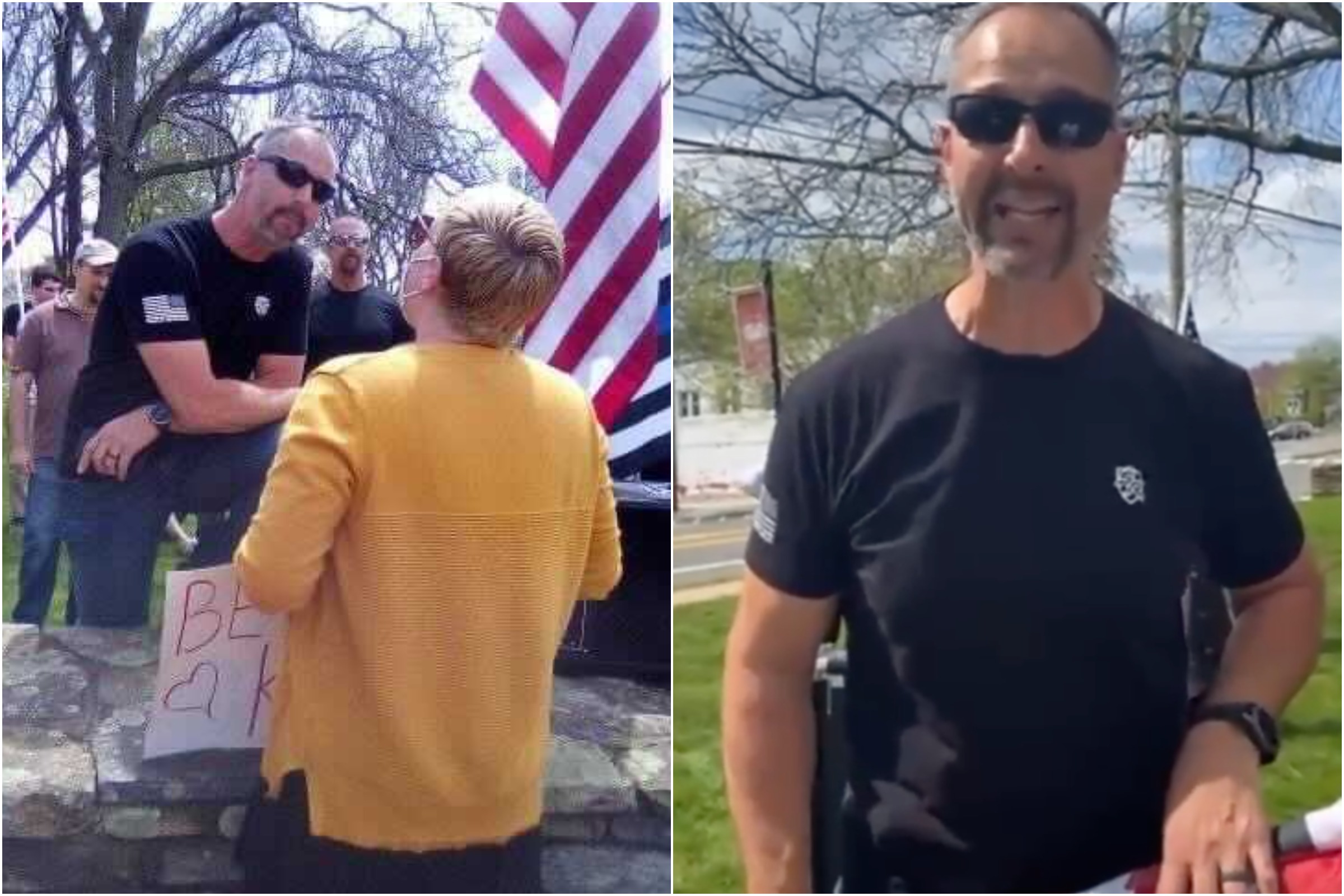 Shocking footage of a Trump-supporting emergency first responder claiming that overdose patients should be left to “die” has gone viral online.

Local Glastonbury, Connecticut firefighter, who was identified in a Twitter thread and by The Journal Inquirer as James Stanley, was videotaped on Sunday saying that NARCAN — the medication designed to reverse an opioid overdose — should be done away with and that “when people overdose, you let them die.”

Michael Oretade, president of the Connecticut Black Lives Matter outreach organization BLM860, told Newsweek that the group planned to collect donations for a mutual aid food drive on Sunday when a group of conservative citizens arrived to protest their work.

“We rally in Glastonbury with Powerup CT and Black in Glastonbury almost faithfully and from my understanding, their rally was a direct counter to our weekly one,” he explained. “So, they were essentially protesting our food drive.”

BLM860 member Linda Ivelisse Correa-Ojeda explained to Newsweek that during the food drive’s counter-protest, Stanley approached making inflammatory comments that eventually turned to a conversation about the Connecticut drug crisis.

In a moment of frustration, she shouts, “You guys got your own epidemic and you’re not solving it!”

Stanley then says, “I think you get rid of f*****g NARCAN, and when people overdose, you let them die.”

“Wow, that would affect the suburban community and not the hood!” Correa-Ojeda shouts as Stanley backs away.

Viewers on Facebook and Twitter were appalled that an emergency first responder would make such a claim.

“As a recovered addict who managed a women’s sober living & worked in rehab for years, this is heartbreaking,” one woman tweeted. “Imagine having people’s lives in your hands & this is your solution. I literally don’t know how to process this.”

“What kind of a*****e protests a food drive?” one viewer commented on Facebook.

Correa-Ojeda also told Newsweek that Stanely’s remarks even angered his fellow counter-protesters once the camera cut.

“The man in the white shirt next to him ended up joining us,” she said. “He originally came in calling us racists, and when the firefighter said that … despite being a conservative, he lived in a sober house, he’s been saved from overdoses himself. It was nice to engage in dialogue with him.”

Members of the BLM860 Facebook group were able to determine that Stanley worked as a firefighter with the Glastonbury Fire Department. The official Facebook page later issued a formal statement on the matter on Monday.

“The Department is aware of a personal comment made by a member of our organization yesterday regarding the use of Naloxone [NARCAN],” they wrote. “The individual’s comment is upsetting, and by no means a reflection of those who dedicate themselves to protecting the residents and visitors of Glastonbury.”

“This is a personnel matter, and there will be no further comment,” they concluded.

On Tuesday morning, Stanley added his own personal apology in the comments section of the fire department’s post. “I would like to apologize for my comment regarding Narcan on May 2nd, it was insensitive and inappropriate,” he wrote.

“I too have suffered loss to substance addiction and understand how hurtful my words were. This comment in no way represents my character or conduct as a 20 year veteran of the fire service.”

He also asked for forgiveness for his outburst: “I accept responsibility for my words and ask the people of the Glastonbury community not to judge me for negative words spoken in one moment, but for the positive actions and contributions of a lifetime of public service.”

For Correa-Ojeda, it was not enough. “My cousin died of a heroin overdose. That’s not cool! How can I trust a firefighter that protests a food drive and says he wants to let people die?!?” she replied.

She also told Newsweek that this was not the first time Stanley has harassed the BLM860 group.

“I was not shocked by his statement, I was just shocked that he said it on camera,” she claimed. “His statement is in line with other statements he’s made about race or women or vaccines or child molesting.”

According to The Journal Inquirer, Stanley claimed that his group Patriots for America did not rally as a counter-protest to the work BLM860 was planning for the day.

“They changed their schedule to interfere with ours,” he told the outlet. “We were there in support of law enforcement, legal immigration & against mandatory vaccination.”

He added that their event was scheduled for 12 p.m. at the Glastonbury Fountains whereas the BLM860 food drive was scheduled from 2 p.m. to 4 p.m. per their public flyer announcement on Facebook.

Alternatively, Correa-Ojeda told Newsweek that this was the latest in a series of actions against BLM860 organized by Stanley.

“James Stanley has been organizing counter-protests against us since last year. This has been multiple times,” she claimed. “It’s not the first time he’s made a controversial or rude statement. They’re usually more racially charged, but this one just so happened to be about NARCAN.”

“His behavior and statements were in line with his behavior over the summer. The only thing that man is going to change, other than possibly backing up for a few months, is not saying stupid stuff on camera again,” she added.

This is the latest instance of a conservative individual going viral for making insensitive remarks in public spaces. In April, a Trump supporter in Canada prompted a police investigation after he allegedly called a 9-year-old wearing a hijab a “piece of s**t terrorist.”