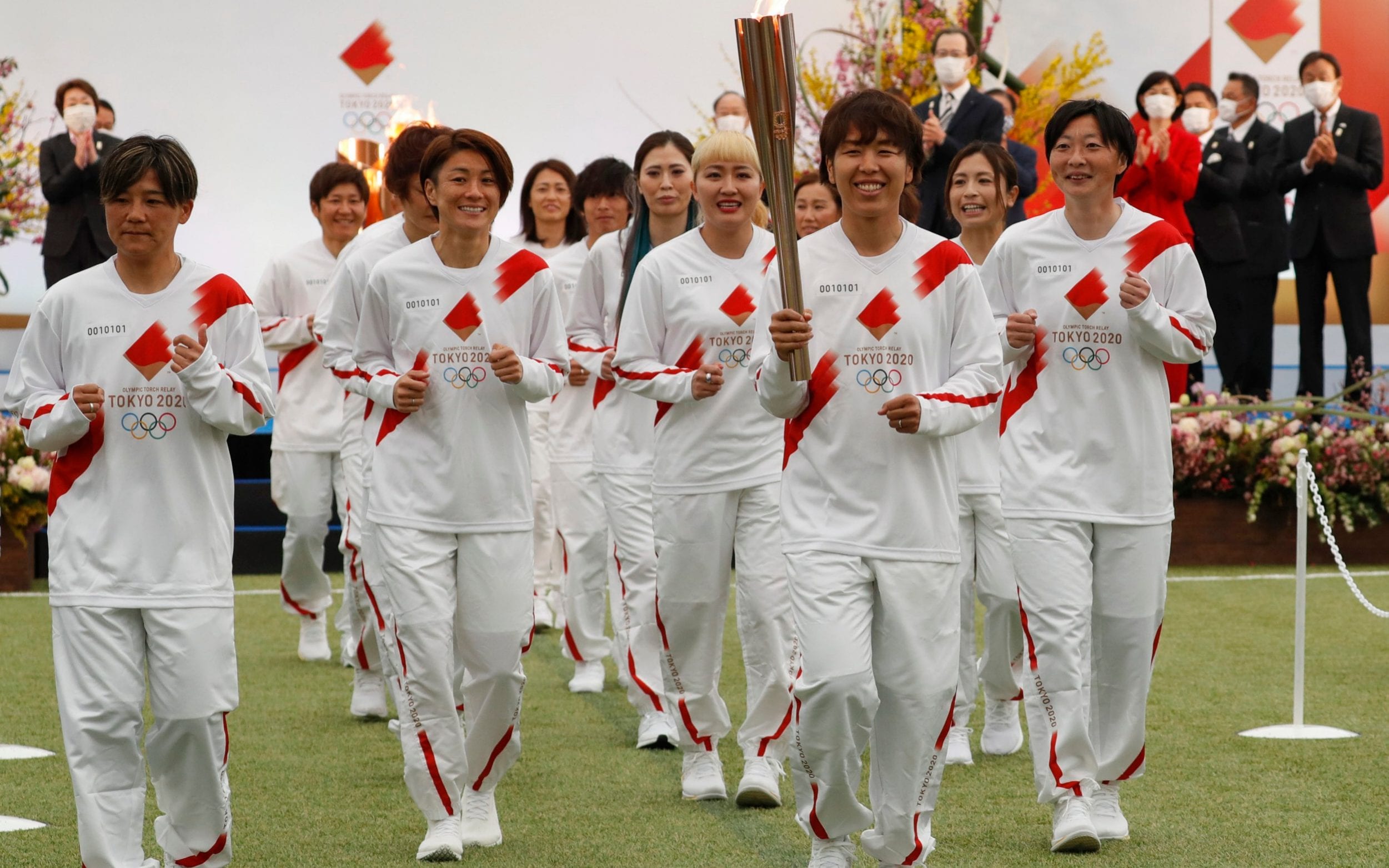 With waves, smiles and high fives, but no cheers, the Olympic torch relay set off on Thursday 25 March, beginning a four-month countdown to the postponed 2020 summer Games in Tokyo, the first ever organised during a deadly pandemic.

The relay, which will culminate with the Olympic opening ceremony on July 23, has been hit by several high-profile runner cancellations as celebrities and top-level athletes have pulled out, citing late notice and worries over the pandemic. About 10,000 runners will take part in the four-month relay, which will go through all of Japan’s 47 prefectures.

Casting a pall over celebrations already scaled back because of coronavirus prevention measures, North Korea also launched two short-range ballistic missiles before the relay began in Fukushima, an area hit hard by the 2011 earthquake, tsunami and nuclear disaster.

“For the past year, as the entire world underwent a difficult period, the Olympic flame was kept alive quietly but powerfully,” Tokyo 2020 president Seiko Hashimoto said at the opening ceremony, which was closed to spectators.

“The small flame did not lose hope, and just like the cherry blossom buds that are ready to bloom, it was waiting for this day.”

Low-key events featuring Fukushima residents in drum and dance performances were followed by a children’s choir before the Olympic flame, flown in from Greece last year and kept alight under 24-hour guard, was used to ignite the torch. Members of the Japanese national women’s soccer team were the first group to run with the flame, wearing white uniforms decorated with red.

Most spectators kept some distance from each other and there were mainly muted claps. Organisers have said the relay will skip areas that are too crowded, or pause until people disperse.

Authorities have decided foreign spectators won’t be allowed in stadiums for this summer’s Games, and it remains undecided how many Japanese will be allowed to attend.

With organisers billing the games as the “Recovery Olympics,” a nod to the disaster as well as the pandemic, Thursday’s runners included many who had fled after the meltdowns at the Fukushima Dai-ichi power plant.

Japan has fared better than most countries, with about 9,000 coronavirus deaths, but Tokyo reported 420 cases on Wednesday, the highest single-day figure this month. Polls show the majority of the public is against holding the Olympics as scheduled.

The organisers insist the Olympics will go ahead, but doctors and nurses have complained about the strain on hospitals and experts warn about the spread of virus variants. Japan was the last of the Group of Seven industrialised nations to launch a vaccine drive. Only 700,000 people have been inoculated so far, most of them medical workers.

The inspiration behind the Tokyo 2020 torch

In an exclusive interview (see video below made prior to the pandemic and one-year delay of the Games) we caught up with Tokujin Yoshioka, the designer of the Tokyo 2020 Olympic torch, to find out what inspired this year’s design and the material he used to make it.

What inspired the Olympic torch design?

“In 2015 I first started drawing the sakura [cherry blossom] emblem with children from the areas affected by the earthquake and tsunami,” he said. “It was their joyful drawings of cherry blossom that inspired the design of this torch.

“The sakura flower is a symbol of Japan. Every March, Japanese people wait not just for the happiness that comes with spring’s arrival but also for the flowers themselves to bloom. For me it represents the Japanese people coming together.”

“In the same way that sakura blooms across Japan, I wanted to design a relay torch that would also spread warmth across the country.”

What is the significance of the material you used?

“It wasn’t that I simply wished to use recycled aluminium. I wanted to consider the deeper meaning of the materials used.

“As it happened, they were taking down the temporary housing so the timing was right to recycle and use it in the torches.”

How did the flame come into your design?

“Of course how the torch looks is very important but more crucially at its core is the Olympic flame. My goal was to create a torch that let people see the flame and really feel something.

“What I really wanted to get right when designing this torch was not its shape, it was the shape of the Olympic flame. I designed the torch for its flame.

“There is of course that sakura motif to the torch made up of five petals. Each petal gives off its own flame, and the structure allows the flames to converge and become one.”

How does it feel to have designed the Olympic torch?

“I’ve been watching the Olympic games since I was a child but never could have imagined that I would end up contributing to them in this way. I haven’t really had much time to celebrate, but I was certainly happy. I also recognised the huge responsibility this position carries, and so really felt determined for this to be a success.”