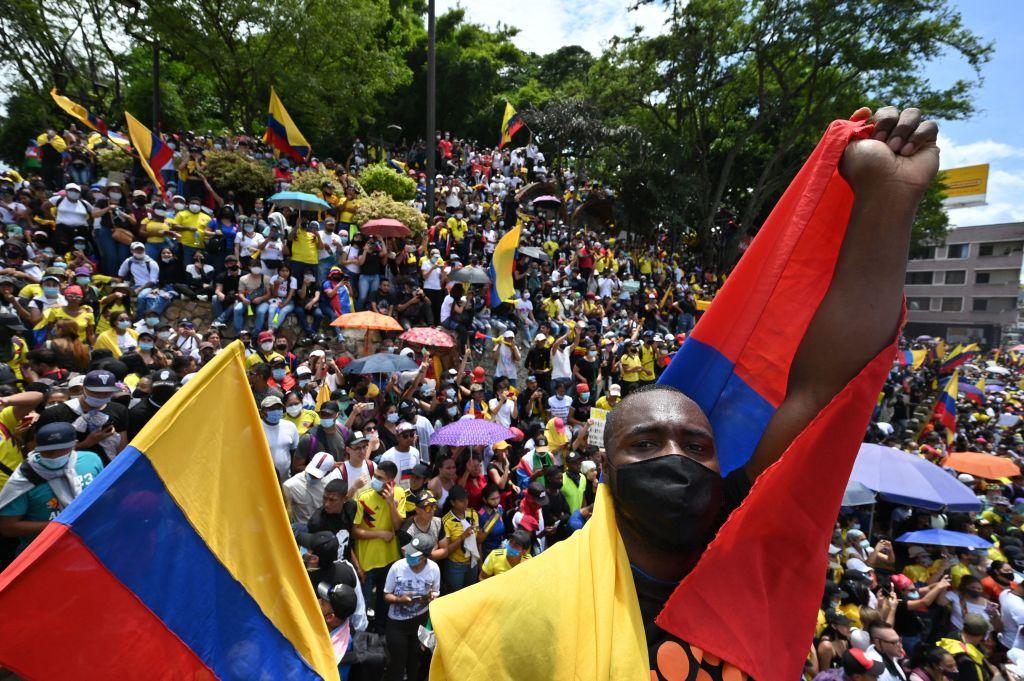 The UN has expressed its indignation over the Colombian police’s handling of protest in the South American country.

At many as 27 people are thought to have been killed in clashes in recent days, with authorities opening fire on protesters speaking out against tax increases and the privatisation of healthcare.

Here is everything you need to know about it.

Protestors say the a tax reform bill will leave them poorer as the country battles its deadliest phase yet of the coronavirus pandemic (Photo: LUIS ROBAYO/AFP via Getty Images)

Why are people protesting in Colombia?

The protests have been going on for a number of days, with the first reports of civil unrest coming in on 28 April.

Demonstrators have been fighting back against tax increases designed to expand funding to Ingreso Solidario, a universal basic income social program established in April 2020 to provide relief during the Covid-19 pandemic in Colombia.

Ingreso Solidario provides monthly payments of around $43 (£31) to low-income populations, with roughly three million of Colombia’s population of 50 million eligible for payments.

A public transportation bus in flames during a protest against the tax reform bill launched by Colombian President Ivan Duque (Photo: PAOLA MAFLA/AFP via Getty Images)

The social program is comparatively small when placed alongside other Latin American countries’ Covid relief plans, and has been criticised for not reaching nearly enough of the citizens who would benefit greatly from the payments.

The Government – under the leadership of president Iván Duque Márquez – intended to increase funding to the program through tax reforms, with a plan of generating $4.8 billion (£3.5 billion), and offering the program to a further 1.7 million citizens.

The reforms included a rise of VAT on more products like food and utilities, the addition of some middle-class earners into a higher tax bracket and the removal of various income tax exemptions.

Colombians have also been angered by Bill 010, proposed to reform health care in Colombia by making the system more privatised.

Those plans would likely have seeded unrest in any year, but proposals to introduce Bill 010 during a pandemic (Colombia is currently experiencing the third-highest number of Covid-19 deaths in Latin America), and the fact the bill was filed through a special committee in the House of Representatives that did not require congressional debate, have caused uproar.

Protesters have also been demanding a litany of other requests, such as a universal basic income at the nation’s minimum wage, additional support for small businesses and a ban on using certain herbicides.

How many people have been killed?

Though the protests have been going on for almost a week, they reached a peak on 1 May (International Workers’ Day or May Day).

However, these numbers were disputed by human rights groups and non-governmental organisations providing differering figures, with some claiming at least 27 people had died.

The Colombian Federation of Education Workers (Fecode), which helped lead protests, has reported thousands of human rights violations, which the government denies.

These include over 1,000 instances of police violence, more than 700 arbitrary detentions and six acts of sexual violence.

Colombia’s largest news outlets have also been criticised for instilling fear against protestors, and focusing on acts of vandalism rather than the true issues at the heart of the demonstrations.

Have the protests worked?

To an extent, the protests do seem to have made a difference.

Initially, President Duque announced that he would not be removing his tax reform plans. He later stated his government would consider removing some of the more controversial proposals from the plans.

However, following May Day, Duque announced 2 May that he was withdrawing the tax reform.

That may seem like a victory for the demonstrators, but the president has said that tax reforms are still “necessary” for Colombia, hinting that the plans may be implemented again at a later date once the unrest has died down.

Despite the removal of the tax reforms, protests continue in Colombia.

The country’s National Strike Committee has announced that another day of protests will be held on 5 May, criticising the government for not convening with groups to make negotiations.

A message from the editor:

Thank you for reading. NationalWorld is a new national news brand, produced by a team of journalists, editors, video producers and designers who live and work across the UK. Find out more about who’s who in the team, and our editorial values. We want to start a community among our readers, so please follow us on Facebook, Twitter and Instagram, and keep the conversation going.