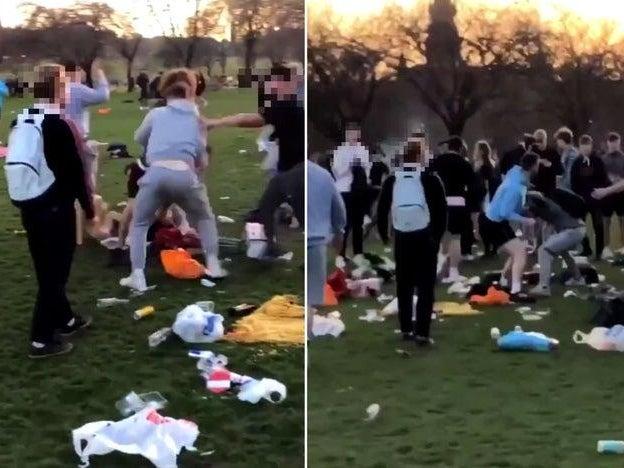 Police and council chiefs have launched a ‘Meadows action plan’ – including a dedicated policing operation, a council surveillance van and park ranger patrols – to deal with the antisocial behaviour and drunken brawls.

Violent scenes at the Meadows

On Saturday, an Edinburgh police officer was taken to hospital with facial injuries after responding to reports of mass gatherings and fighting at the beauty spot.

A video, shared widely on social media, was taken by a Scottish rapper on his Instagram @jaad_rapper, and shows the dramatic scenes that include police breaking up the fights by wrestling people to the ground.

At one point, a man is smashed over the head with a glass bottle by someone he had been fighting with.

Three people have now been charged in connection with anti-social behaviour and a serious assault, and Police Scotland is appealing to anyone who witnessed other violent incidents in the park to come forward with information.

Now, Police Scotland and Edinburgh City Council have agreed to a ‘Meadows action plan’ to clampdown on troublemakers.

An email to elected officials reads: “Police Scotland have confirmed that they have increased their resourcing levels to manage the Meadows as a dedicated policing operation.

“This means that a designated superintendent has been allocated to manage the operation and additional specialist resources have been made available to respond quickly to any escalations in disorder.

“There will be a substantial and visible police presence on the Meadows from mid-morning to provide reassurance and early engagement with park users.

“The council CCTV van will be deployed over the course of the weekend to provide a visible deterrent to any anti-social behaviour and to assist in gathering evidence if required.

“Re-deployable CCTV camera coverage will be deployed to hotspots for street urination and defecation, with associated signage to dissuade this behaviour.

“The public toilets will continue to remain open until 8pm over the course of the weekend, as was the case over the bank holiday weekend.

“Park Rangers and Street and Environment Enforcement Officers will be deployed to the Meadows on patrol to hand out black bags and advice on litter management.

“In addition, enforcement action will be taken (in the form of Fixed Penalty Notices) where littering offences are witnessed and it is safe for our staff to do so.

“Licensing Standards Officers are working with Police Scotland colleagues to focus additional attention on licensed premises in the vicinity of the Meadows and to ensure that all sales are both legally compliant and that licensees are cognisant of the recent events.

“Joint media releases are being arranged from Police Scotland and the council to reinforce the approach being taken and the importance of responsible behaviour.

“Social media campaigns and signage are being designed and quickly rolled out to reinforce that the consumption of alcohol in the Meadows is illegal.”

Southside and Newington councillor Steve Burgess, Green Party, said: “People right across Edinburgh were rightly shocked at the scenes on the Meadows over the Easter weekend.

“I am pleased to see action by both council staff and police to seek to ensure that there is no repeat in the short term.

“However, it’s clear that much more needs to be done to improve facilities in the area – mostly obviously, well-located public toilets and more litter collection.

“As opportunities for people to get together and enjoy familiar activities open again I’d hope that the Meadows no longer faces such concentrated problems.”

Alex Orr, an SNP list candidate for the Lothian region who floated the idea of the ‘Meadows summit’ after personally witnessing the chaotic scenes over the weekend, said: “I am clearly delighted to see such action being taken, adopting a number of the measures suggested, it is a really positive start.

“There are some further measures I would suggest are urgently looked at, including more toilet facilities and bins, which has been an ongoing issue for some time.

“The Meadows is a marvellous resource for everyone to enjoy, let’s look to keep it that way.”