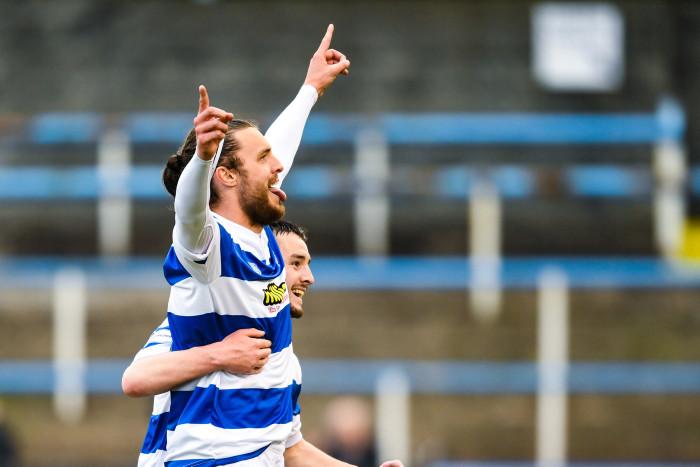 Morton striker Robbie Muirhead celebrates the opening goal at Cappielow which put his team firmly in control of the Championship play-off final against Airdrieonians. (Photo by Ross MacDonald / SNS Group)

Leading 1-0 from the first leg in Airdrie on Tuesday thanks to Robbie Muirhead’s stoppage time goal, the outcome at Cappielow was never really in doubt once the big striker doubled that advantage with a stunning 12th minute opener.

Watched by 500 of their own fans inside the old stadium, along with around another 100 who had found a less socially-distanced vantage point behind a fence at the Sinclair Street end, Morton were dominant throughout.

It completes the primary objective handed to Gus MacPherson when he was appointed manager at the Greenock club in March.

For Airdrie boss Ian Murray, his team’s impressive late season push into the League One runners-up spot was ultimately in vain and they must now prepare for an eighth consecutive campaign in the third tier.

For those home supporters who joyfully made their way through the gates of one of Scotland’s most characterful venues for the first time since the pandemic struck, Muirhead’s early goal was the perfect reminder of why nothing beats the experience of watching their team in the flesh.

As Morton capitalised on a nervy start from the Airdrie defence, Muirhead displayed the kind of quality which makes you wonder why he hasn’t sustained a career at a higher level of the game.

Still only 25, the former Hearts, Dundee United and Kilmarnock player brought the punters to their feet when he pounced on a slack attempted clearance and sent a guided missile of a volley high beyond the despairing right hand of Airdrie goalkeeper Max Currie.

As Morton looked to turn the screw, more fine work from Muirhead created an opening which Cammy Salkeld dragged just wide. Airdrie were hanging on grimly, surviving a penalty claim for handball against Leon McCann, but their hopes of limiting the damage before the break were undone by a second Morton goal in the 44th minute.

When Lewis Strapp’s shot rebounded off the crossbar, Gary Oliver was on hand to ram the ball home from close range.

It was a good start to the weekend for the McGinn clan with on-loan Hibs midfielder Stephen the stand-out performer as he pulled the strings for Morton. He will be hoping young brother Paul is also a winner as he goes for Scottish Cup glory with the Easter Road club on Saturday afternoon.

Airdrie tried to muster a response in the second half, Thomas Robert showing occasional flashes of menace, but Morton were seldom really troubled with emergency on-loan keeper Scott Fox a bystander for most of the night.

They set the seal on a fine all-round display with their third goal in the 78th minute. Currie could only parry McGinn’s fierce shot from 20 yards, presenting Muirhead with a simple close range finish.