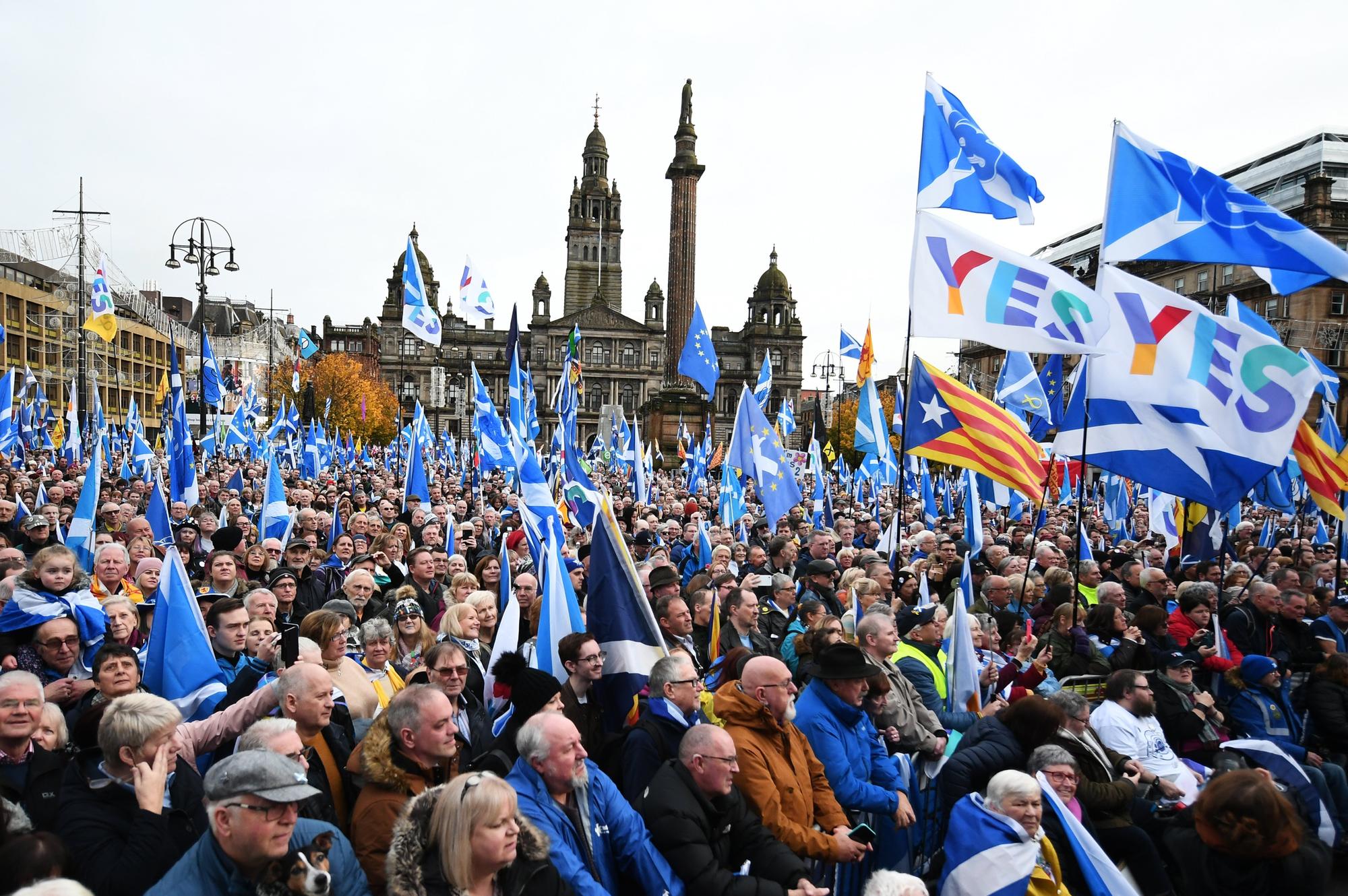 Judges should rule on whether Scotland can hold a second independence referendum without Westminster’s consent before the Holyrood election so that people do not have to vote “in ignorance”, a court has heard.

An indyref2 rally in Glasgow in November, 2019

Appeal judges are hearing a case brought forward by Martin Keatings on behalf of the Forward As One group, asking the court to declare the Scottish Parliament has the power to legislate for another vote.

After a two-day hearing in January, Lady Carmichael dismissed the case – ruling it was “plainly raised prematurely” and that the question of another referendum was “also hypothetical, and may never come to pass”.

At an appeal hearing at the Court of Session on Tuesday, Aidan O’Neill QC, appearing for Mr Keatings, said it is clear that the Scottish Parliament can legislate for an independence referendum.

He said the Scottish Government has now published a draft Bill for a second vote on independence and Constitution Secretary Mike Russell has said the Bill will be introduced if the SNP gets a majority at next month’s Scottish Parliament election.

Mr O’Neill called on the court to make its decision before the ballot on May 6 so voters can make an informed choice.

“So what that means is that there is a real issue for this court to determine – is he right or is he wrong on that? Is the Scottish Government right or wrong in its claims?

“It is a live matter, it is an issue which has to be determined now because it will be too late for the voters if they have to cast their votes in ignorance of matters because the Scottish and UK governments have decided it’s politically expedient for the voters to be kept in ignorance. That is not how democracy works.”

He added: “It’s necessary that the decision of this court be made before this election precisely to allow democracy properly to work by informed voters.”

Lord Carloway, Lord President of the Court of Session, asked: “You expect the courts to make a decision on this matter in four weeks?”

Mr O’Neill replied: “It is a matter for the court but yes, I’m suggesting that that would be the court exercising its constitutional jurisdiction.”

Lord Carloway pointed out the court has other cases on its rolls and it should not be assumed it would be capable of doing as suggested.

Mr O’Neill also told the court, sitting in a virtual hearing, it was within the powers of the Scottish Parliament to legislate for an independence referendum and said that they were seeking assurances on that through the legal action.

He said: “The question itself I say is absolutely straightforward and it’s clear that in any proper looking at the terms of the Scotland Act as it now stands, it is clear that that issue of whether or not an independence referendum can be legislated for by the Scottish Parliament is decidedly yes in favour of that proposition and that is why in this action we seek declarators to that effect.”

Mr Keatings is standing as an independent candidate for Mid-Scotland and Fife in the vote on May 6.

Andrew Webster QC, for the Advocate General of Scotland, said the case can be narrowed down to the idea the the pursuer (Mr Keatings) needs the court’s advice to be able to decide how to vote in the election next month and that the court should not “effectively give voting advice”.

He said: “As your Lordship has observed elsewhere there are certain political issues which require to be played out in the appropriate forum.

“This court should not enter that forum to effectively give voting advice to members of the public.

“The idea that advice is necessary for the pursuer is frankly far fetched.”

He also said that a ruling by the court on a Bill while it is passing through parliament could encroach on parliamentary functions.

Mr Webster said: “You step into the legislative arena by expressing a view during the passage of a Bill then that is highly likely to encroach upon the parliamentary function of debate.”