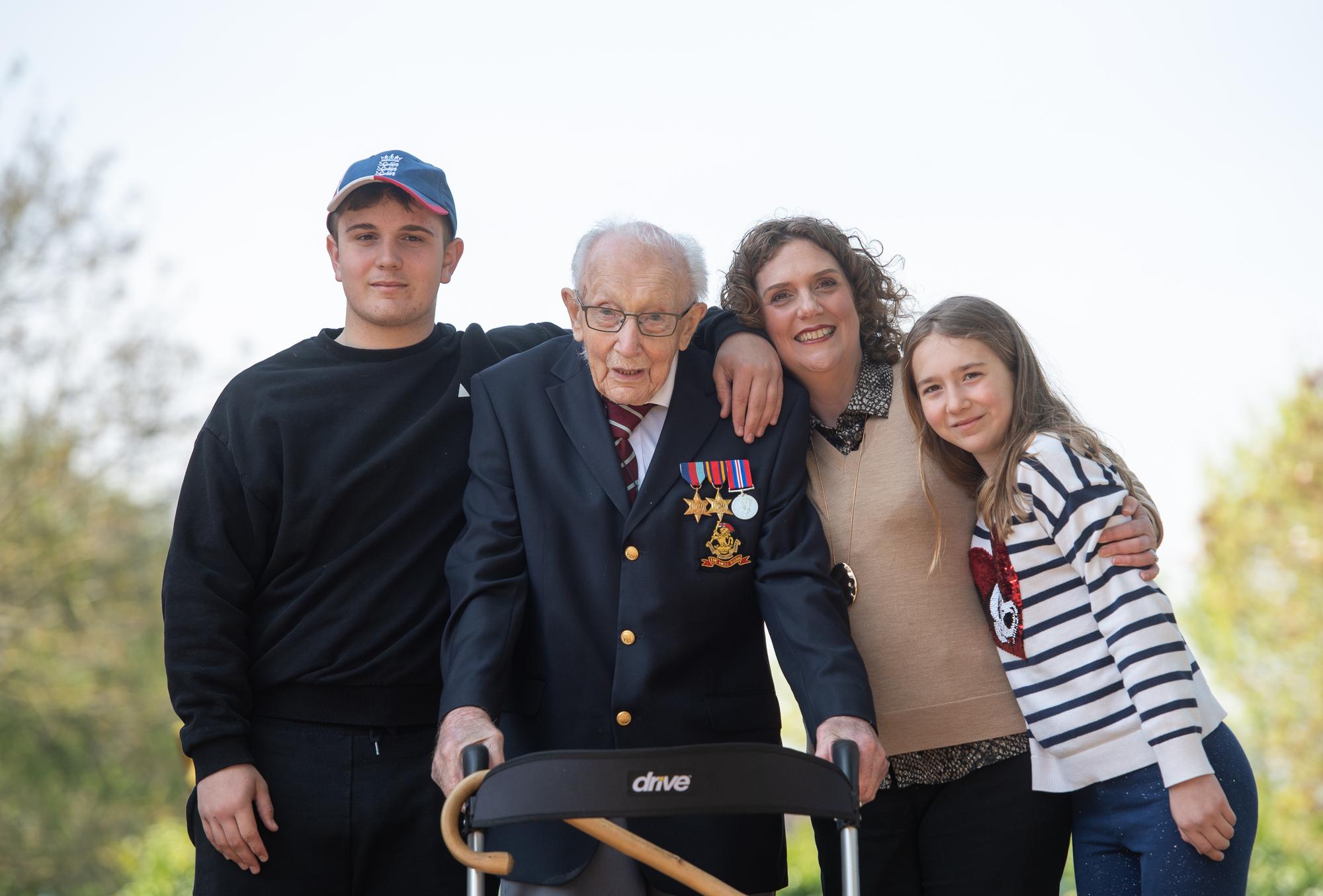 Captain Sir Tom Moore’s family have called on the nation to celebrate his spirit of generosity by taking on their own ‘Captain Tom 100’ charity challenge – on what would have been the weekend of his 101st birthday.

Sir Tom raised more than £32 million for the NHS by walking 100 laps of his garden before his 100th birthday on April 30 last year.

He died at Bedford Hospital on February 2 after testing positive for Covid-19.

His daughter Hannah Ingram-Moore is urging people to create their own challenge themed around the number 100 to raise money for the Captain Tom Foundation or a charity of their choice.

They are encouraged to take on their challenge between Friday April 30 and the Bank Holiday Monday on May 3.

Details of the Captain Tom 100 were revealed on April 6 – a year to the day since Sir Tom started walking laps of his garden in Marston Moretaine, Bedfordshire.

Ms Ingram-Moore said her family are “still a grieving family” but are “propelled forward by hope”.

“I really hope people see this for what it is, which is an absolute chance to bring joy, put money back into charities and support the Captain Tom Foundation, which after all is the legacy of hope that he’s left us behind,” she said.

She said the family will take part by continuing Sir Tom’s walk “right where he left it because we feel it’s the only right thing to do”.

She went on: “We want people to go crazy and create their own 100 – a challenge around the number 100.

“We thought of whether it should be 101 but it’s definitely 100 because that year he lived being 100 was the best year of his life, almost certainly.”

Sir Tom knew before he died that a 101st birthday celebration was being planned for him and that this was to be an inclusive event, Ms Ingram-Moore said.

“I really regret that he’s not here to share it as I think he would just love it,” she said.

She said he would have thought that the Captain Tom 100 was “brilliant”, adding: “He was a Yorkshireman remember at the end of the day, not trending towards excitement most of the time.

Challenges could include walking 100 steps, scoring 100 goals, baking 100 cakes or writing a 100-word poem – this could be anything as long as it is in line with current government social distancing guidelines.

“My father loved the beach so he would have said 100 sandcastles or jump 100 waves,” said Ms Ingram-Moore.

“We are so grateful for the incredible support we have received since my father started his record-breaking fundraising walk and that his message of hope was shared with the world.

“Captain Tom was very proud to be able to leave behind the growing legacy of his foundation and the Captain Tom 100 feels like the perfect way to celebrate the hope and joy we know he inspired in so many.

“He would have loved the idea that everyone could get involved and that together we would ensure that ‘tomorrow will be a good day’.

“We look forward to celebrating with you and seeing how you do the Captain Tom 100 – your way.”

The Captain Tom 100 is being organised by The Captain Tom Foundation with London Marathon Events and supported by the Mass Participation Sports Organisers (MSO), adam &eve, LiveWire Sport and Studio Republic, who are all working pro bono.

Ms Ingram-Moore said Sir Tom believed he would come out of hospital alive and was looking forward to his 101st birthday celebrations.

She said her father had told nurses ‘I’m coming back out’, and that she had laughed and reminisced with him during his final days in hospital.

“None of us could have planned for what happened,” said Ms Ingram-Moore.

“My father definitely did not expect not to be here. That’s just a fact.

“He lived those 100 years, and the last year was simply extraordinary.

“How we feel is that we were not expecting him not to be with us and we miss him desperately.”

She said Sir Tom would tell nurses: “I’m coming back out, I’ve got a lot of fundraising to do, I’ve got my birthday celebration.”

Ms Ingram-Moore said: “While he was in those last few days in the hospital I don’t think he ever thought he wouldn’t come out, he never talks like that.

“We laughed and we had lovely times reminiscing, we reminisced incredibly about the crazy times of the last year.”

She went on: “Coming to terms with going into hospital believing that my father would come out to very quickly understanding that he wouldn’t was a massive shift in my emotional state.

“Then understanding how I was going to tell the world that felt like an incredible burden if I’m honest.”