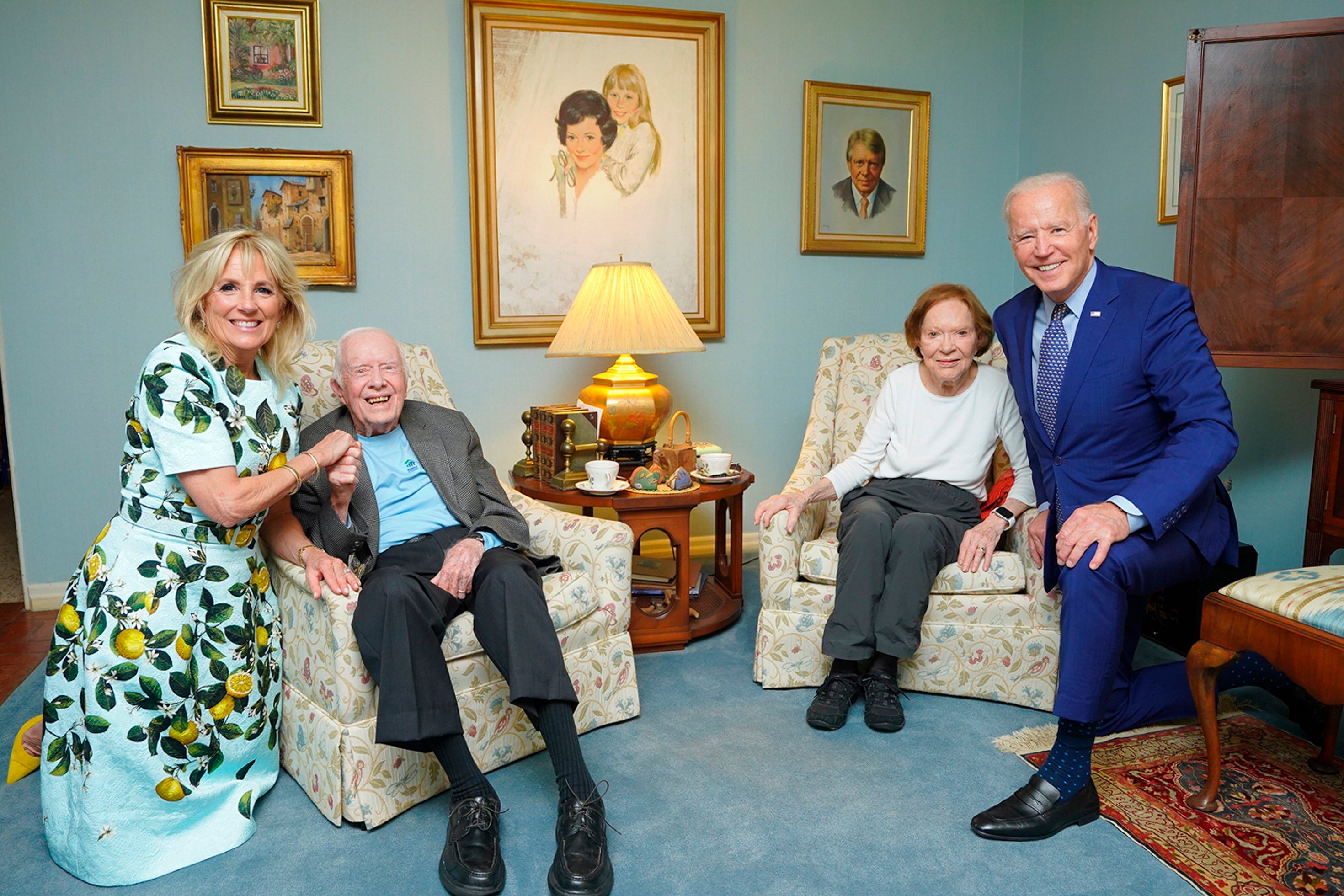 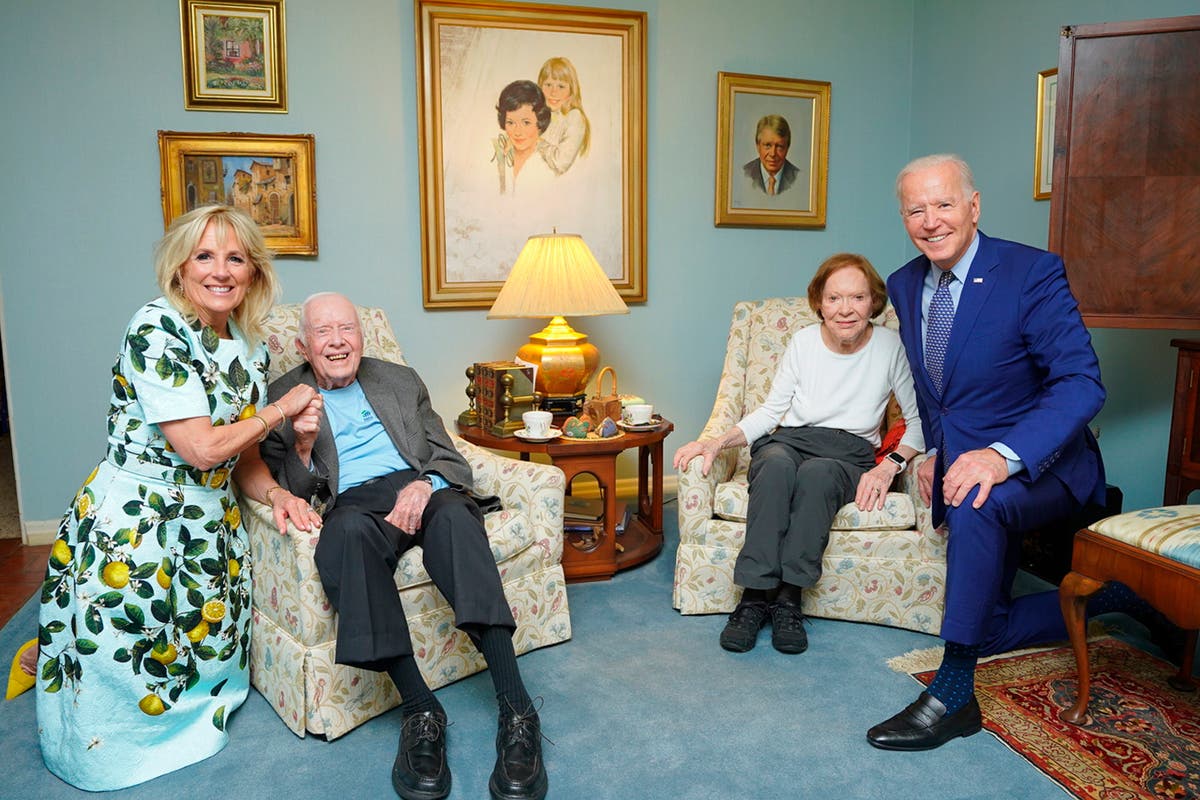 Jimmy Carter has had something of a moment lately, at least to the extent you can when you’re a 96-year-old cancer survivor who very rarely appears in public. Thanks to a bizarre Brobdignag-in-Lilliput photo of Joe and Jill Biden visiting the 39th president and his wife Rosalynn, Carter’s name is back in circulation – and not just among affectionate Democrats.

Of the three Democratic presidents since the Vietnam War, Carter gives Republicans by far the best example of how dangerous it is to let Democrats anywhere near the reins of power. Stagflation, the Iranian hostage crisis, the interminable “malaise speech” in which he lectured Americans about how they weren’t confident enough — was there anything Carter ever got right?

Yes, Carter did broker the Camp David Accords, the kind of diplomatic achievement sorely needed today given the carnage currently unfolding in Israel and Palestine. But to Republicans, he will always be a milquetoast one-term failure who let prices run out of control while his helicopters crashed humiliatingly in the desert. The notorious photo of him being attacked by a swamp rabbit pretty much sums it up.

And so, as the Biden administration stubbornly refuses to come down crashing and burning after a mere four months, certain Republicans are once again invoking the Carter years to predict what’s to come. A new era of American decline, they say, is just beginning – and Biden is doing his best to drag the country back to the disaster of the late 1970s.

This effort is being spearheaded, naturally, by Fox News, whose very own Laura Ingraham laid into Biden’s Carter-ness in a segment earlier this week.

Raging against the “cataclysmic” April jobs report and hectoring her viewers that “Joe thinks you’re stupid enough to think that he can spin his way out of this with happy talk” while warning them that he will spend their soon-to-be-higher taxes on “green energy boondoggles and worthless social justice programmes”, Ingraham claimed that “we’re being held back by an administration and Congress that is committed to gutting the prosperity of the American people”.

For a certain kind of conservative, that combination of policy failure and supposed malice toward prosperity is exactly what Carter embodies. The argument is that only a Democrat could fail so hard, and only a Democrat would actually want ordinary, respectable people to suffer. Yes, it’s absurd to argue that Carter’s failures were intentional and unintentional at the same time, but that’s not the point: vote Democrat and you know what you’re in for.

This has all been accelerated, of course, by the shutdown of the Colonial Pipeline, which was attacked by ransomware hackers rather than laid low by the global energy market and macroeconomic problems. The sight of a Democratic administration having to handle a crisis involving petroleum in any form is still conservative catnip, it seems: douse a poor jobs report in high-priced fuel and the resulting fire has more than whiff of the late 1970s.

As far as most people in the vast middle of the political bell curve are concerned, Biden is basically a nice person who wants good things for other people. His plans, priorities and competence are points to argue – as they are with all presidents. It makes little sense to compare him to a president who governed the country in a radically different epoch, under very different conditions, without a pandemic and a domestic terrorism problem to contend with.

It doesn’t help that Carter’s post-presidency is a model not only of reputational salvage, but of fundamental decency. Whatever the merits or otherwise of his years in power, he is now respected the world over for his contributions to peace and diplomacy. Not for him the noxious orange haze of a tacky Florida members’ club retrofitted into a mausoleum for someone who’s not even dead.

Meanwhile, the Republican Party is out of power on the national level, and has won the popular vote in only one election since 1988. It has responded to this not by adapting to better resemble the country at large, but by keeping just enough of the electorate addicted to the most dangerous ideological drugs on the street.

As things stand after four years of Trump, it’s hard to make a serious case that Biden is the ultimate threat to the nation’s literal and spiritual health, especially given the alternative.

In the end, the economy is struggling not because of decades of Democratic ineptitude and weakness, but because of a pandemic that raged out of control under a Republican president – one whose intractable psychopathology still has his party in its grip. And the culture is in pain not thanks to some self-induced Democratic “malaise”, but primarily because of the GOP’s disastrous acquiescence to some of the worst ideas in America.

Nothing can obscure the fact that the Carter years were fraught, frustrating and even enraging for millions of Americans. Ronald Reagan demolished Carter at one TV debate by simply asking his viewers if they were better off than they were four years ago – and the memory of the Carter malaise lingered so long that four years later, he was essentially able to ask the same question again.

“It’s morning again in America,” said one of the most successful political ads of all time, “and under the leadership of President Reagan, our country is prouder and stronger and better. Why would we ever want to return to where we were less than four short years ago?”

One more thing: To remember the Carter administration firsthand, you need to be around 50 or older – and to have refueled your car with your own money during the energy crisis, you’d have to be in your sixties. To the extent this argument is meant to draw on people’s memories, it won’t do much to bring round a generation that mostly holds the GOP in the contempt it deserves.