The major winter blast that is gripping the nation will reach its peak beginning today and lasting through much of the week with two major storms to track along with the Arctic air surging into the southern U.S. Seattle recorded 11.1 inches of snow on Friday and Saturday which is a top 10 two-day snowfall for the city. On Saturday alone, Seattle recorded 8.9 inches of snow which made it the snowiest day for the city since 1969, 52 years ago. In Portland, significant freezing rain accumulation, with locally up to 1 inch of freezing rain and sleet, caused widespread power outages and dangerous roads. On the East Coast, Virginia and much of the state stretching into Maryland saw over

The stabbings all occurred within a 24-hour period, police said. February 13, 2021, 11:22 PM • 5 min read Share to FacebookShare to TwitterEmail this article Police are investigating four stabbings that occurred in the New York City subway system within a 24-hour period, leaving two victims dead, authorities said. The incidents all occurred along the A subway line. At least three of the stabbings appear to be connected, and police are investigating whether the fourth is as well, NYPD Commissioner Dermot Shea said during a press briefing Saturday afternoon. The first incident occurred Friday at approximately 11:20 a.m., when a 67-year-old man was stabbed by an unknown man at the West 181st Street station in upper Manhattan, police said.

Exactly a month and a week after insurrectionists incited a riot at the Capitol on Jan. 6, former President Donald Trump‘s second impeachment trial came to a climactic end on Saturday afternoon, with Trump being acquitted for his alleged role of inciting the deadly event. A majority of senators voted to convict the former president, but failed to reach the super majority threshold needed for a conviction. “This has been yet another phase of the greatest witch hunt in the history of our Country. No president has ever gone through anything like it, and it continues because our opponents cannot forget the almost 75 million people, the highest number ever for a sitting president, who voted for us just a

Many states will see record low temperatures. February 13, 2021, 11:30 AM • 6 min read Share to FacebookShare to TwitterEmail this article The major winter blast occurring across the United States is about to get much worse. Nearly every part of the U.S. is going to seeing dangerous weather over the next week. At least 40 states have weather alerts Saturday morning, as multiple storms are moving from coast to coast and a dangerous arctic air is about to hit the Gulf Coast. A major winter storm is brining heavy snow and freezing rain to the Pacific Northwest, including the cities of Portland, Oregon, and Seattle, Washington. Over 0.8 inch of ice has been reported in some places just

The White House on Friday suspended a press aide who reportedly threatened to “destroy” a reporter working on a story about his relationship with another journalist. Deputy press secretary TJ Ducklo was suspended for one week, without pay, after Vanity Fair reported he told Politico’s Tara Palmeri that he would “destroy” her for writing about his relationship with Axios reporter Alexi McCammond. Vanity Fair reported Friday that in a conversation with Palmeri, who previously covered the White House as a correspondent for ABC News, Ducklo had “made derogatory and misogynistic comments” — including accusing her of being “jealous” of his relationship. “I will destroy you,” he told Palmeri, according to the magazine, which cited anonymous sources. White House press secretary 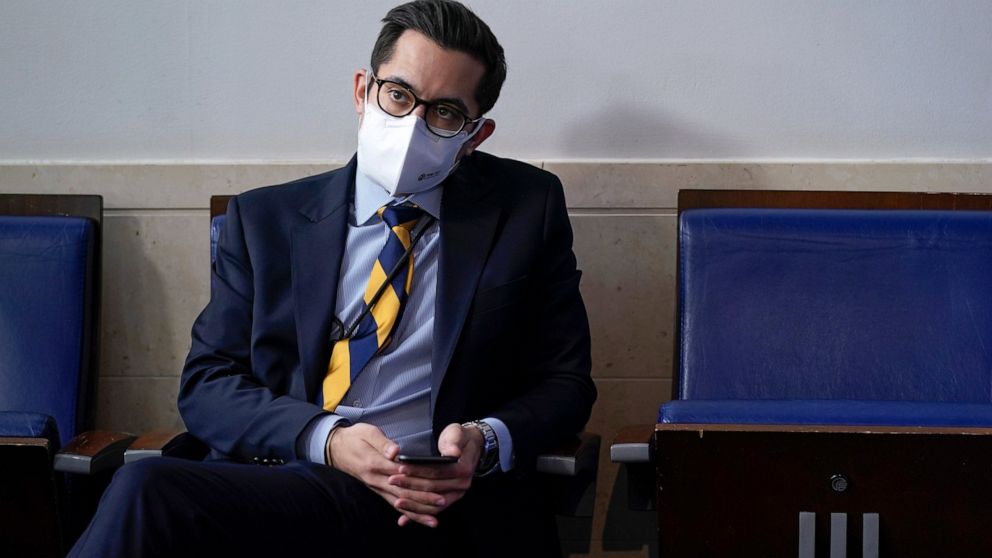 The admission came in a September conference call with legislators. February 12, 2021, 9:04 PM • 6 min read Share to FacebookShare to TwitterEmail this article The office of New York Gov. Andrew Cuomo confirmed Friday the contents of a recording that shows the governor and his team withheld from state legislators the true number of coronavirus deaths at New York nursing homes, out of fear it could be used against them by the Trump administration. The governor’s top aide, Melissa DeRosa, confirmed the contents of the recording of a September conference call with Democratic state legislators, first reported by the New York Post, in which she admits that the governor’s office withheld the numbers due to concerns they would

TOKYO and LONDON — Yoshiro Mori, the embattled president of the Tokyo Olympics organizing committee, resigned Friday following backlash over sexist comments he made suggesting women talk too much in meetings. “As of today, I will resign from the president’s position,” Mori said during an executive board and council meeting. “My inappropriate comments have caused a lot of chaos.” Mori, an 83-year-old former prime minister of Japan, sparked outrage last week after he made the remarks during an executive board meeting that was held online. When giving his “private opinion” about the Japanese Olympic Committee’s goal of increasing the number of female board directors from 20% to more than 40%, Mori expressed concern about how that would affect the length

One suspect allegedly incited a Louisville riot on the day of the Capitol siege. February 12, 2021, 6:32 AM • 4 min read Share to FacebookShare to TwitterEmail this article The Justice Department announced the arrest of two militia members Thursday associated with the violent anti-government “Boogaloo Bois” movement, including one who they allege sought to incite a riot in Louisville, Kentucky, “contemporaneous with the Capitol riots” on Jan. 6. The suspects who were arrested by the FBI Thursday are John Subleski, 32, and Adam Turner, 35, of Louisville. Subleski is charged with inciting a riot and committing an act of violence to encourage a riot in downtown Louisville “through the use of social media and other electronic communications,” according

A Wisconsin judge on Thursday denied a request to increase Kyle Rittenhouse’s $2 million bond and issue an arrest warrant for him after a prosecutor argued that the teenager, charged in the fatal shootings of two men at a protest in Kenosha, Wisconsin, violated conditions of his release by failing to report to the court the address of a “safe house” to which he’s moved. Assistant District attorney Bruce Schroeder had filed two motions asking that the 18-year-old’s bond by be increased by $200,000 and that he be re-arrested until the bond new bond is covered. But Kenosha County Circuit Judge Bruce Schroeder ruled that the prosecution had not met its burden to prove that either of those measures was