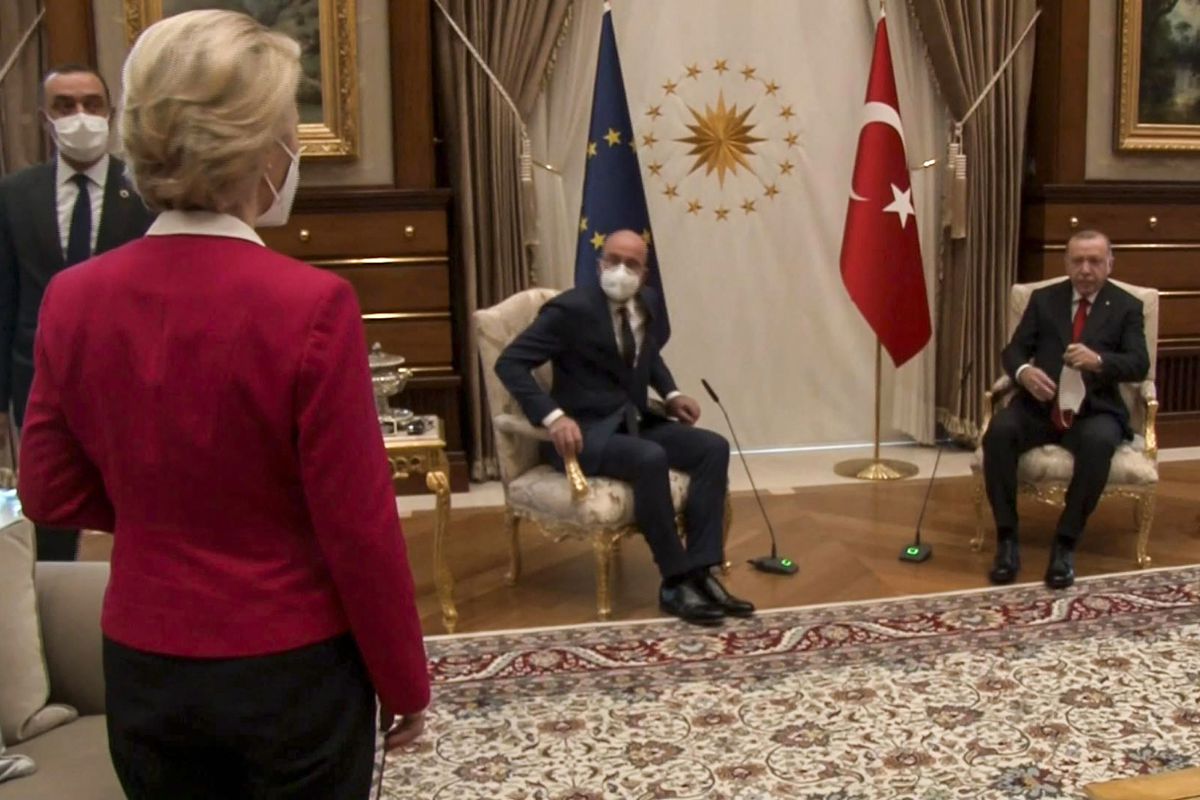 Turkey on Thursday strongly rejected accusations that it snubbed Ursula von der Leyen – one of the European Union’s most powerful executives – because of her gender, insisting that the EU’s own protocol requests were applied during a meeting at the Turkish presidential palace.

Von der Leyen – the European Commission president – and European Council chief Charles Michel met with Turkish President Recep Tayyip Erdogan for talks on Turkey-EU relations on Tuesday. The guests were led into a large room for discussions with Erdogan, but only two chairs had been set out in front of the EU and Turkish flags for the three leaders.

Von der Leyen stood looking at the men who took the chairs, expressing her astonishment with a “ehm” sound and a gesture of disappointment. She was later seen seated on a large beige sofa, away from her male counterparts.

The images drew intense criticism on social media and accusations of gender discrimination.

“Turkey is a deep-rooted state and this is not the first time that it has hosted a visitor,” Cavusoglu said. “The protocol applied during its (international) meetings is in line with international protocol rules as well as the world-renowned Turkish hospitality traditions.”

Cavusoglu insisted that Turkish and EU officials in charge of protocol had held meetings prior to the visit and that the arrangement was in line with EU requests.

“The protocol that was applied during the narrow-scope meeting that was held at our president’s office met the requests of the EU side. In other words, such a seating arrangement was made in line with the suggestions of the EU side. Period,” he said.

The Turkish minister added that he felt obliged to lay the blame on the EU publicly following accusations against Turkey from even “the highest levels of the EU.”

EU Commission chief spokesman Eric Mamer said Wednesday that von der Leyen was surprised by the arrangement and that she should have been seated together with Michel and Erdogan.

“She decided to proceed nevertheless, prioritizing substance over protocol, but nevertheless let me stress that the president expects the institution that she represents to be treated with the required protocol,” Mamer said, adding that von der Leyen had asked her team to make contacts ensure that the incident is not repeated in the future.

Mamer also said Von der Leyen’s protocol team did not travel to Turkey with her due to the coronavirus pandemic.

Michel said late Wednesday that the embarrassment was the result of the “strict interpretation” by Turkish services of protocol rules, and he regretted “the differentiated, even diminished, treatment of the president of the European Commission.”

He said photographs of the meeting gave the impression that he was “indifferent” to the situation. “Nothing could be further from the truth, or from my deeply held feelings – or indeed from the principles of respect which I hold so dear,” he said.

“At the time, while realizing the regrettable nature of the situation, we decided not to make matters worse by creating a scene,” he said.