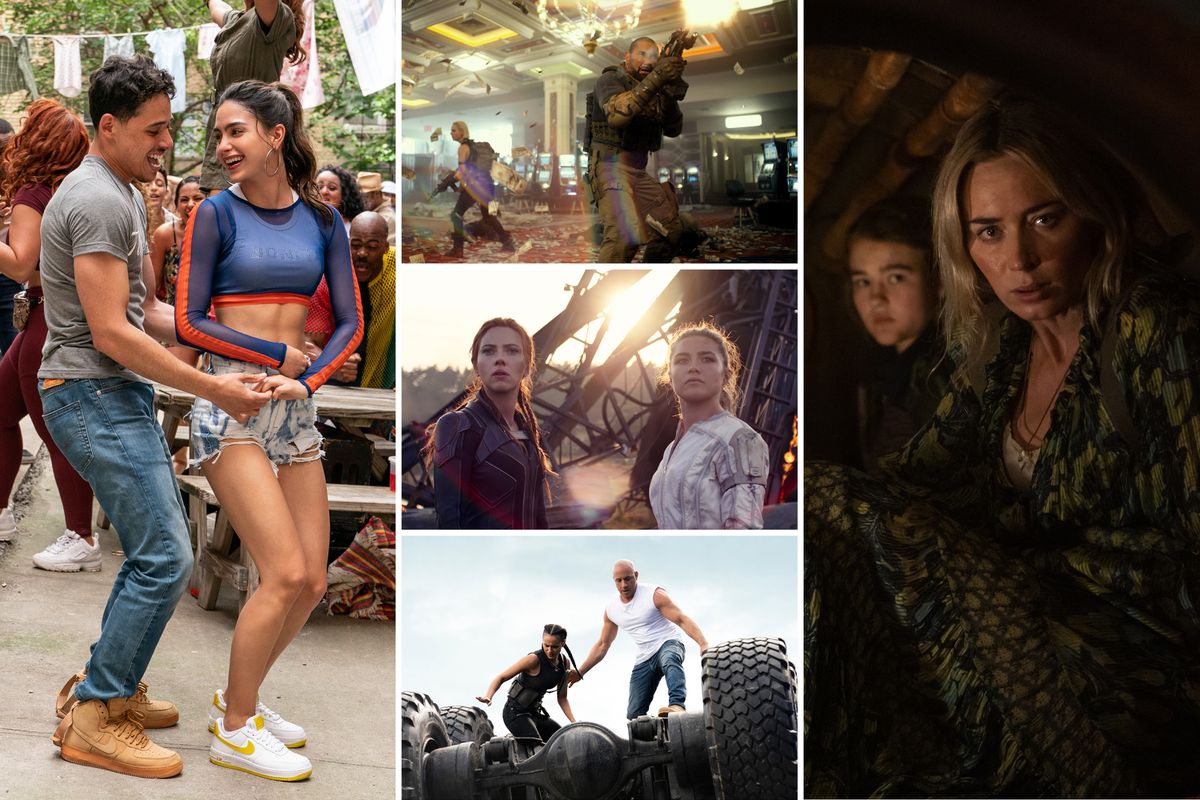 What does a Canadian summer movie season look like in 2021, the (second) year of our discontent? For kicks, I went back to look at last year’s season preview[2], where I cautiously highlighted 25 films that were definitely, probably, maybe coming out in 2020: 22 made the cut. Not bad. But the situation is even more fluid this time around, with U.S. multiplexes reopening and many Canadian cinemas[3] still collecting dust.

So to again hedge my bets, this year’s summer movie preview is divided into two parts: titles that will absolutely be available to Canadians (thanks to streamers) and tentative titles whose domestic premieres depend on theatres opening and/or studios taking pity on our vaccine-poor nation by releasing their films digitally.

The Woman in the Window

Amy Adams fans have been waiting to see this thriller for two years, with the film yanked back and forth between release dates (October, 2019; then May, 2020; then Winter 2020 then finally this May) and studios (20th Century Fox, then new Fox owners Disney, now Netflix). While the murder mystery might very well be good, I’m skeptical it’ll match its behind-the-scenes drama, which also includes a mini-scandal involving the author of the source material, A.J. Finn – a.k.a. Daniel Mallory, the subject of an extensive New Yorker exposé labelling him a chronic liar. (Netflix, May 14)

Army of the Dead

It only makes sense that our year of hopeful chaos belongs to Zack Snyder. The director proved naysayers wrong(ish) by finally releasing his four-hour megacut of Justice League in March, and now he has a new zombie movie to brag about, almost two decades after his breakthrough work on the Dawn of the Dead remake. This unrelated undead adventure focuses on a group of mercenaries planning a Vegas heist amidst a zombie outbreak. Smart money is on Snyder this time. (Netflix, May 21)[4]

The gritty live-action back story on everyone’s fourth-favourite Disney villain is finally here, just like we (someone?) all demanded. Emma Stone plays the title PETA-hater, with I, Tonya director Craig Gillespie tasked with deploying as many needle-drops as necessary to make this concept work. (In theatres and on Disney+ with Premier Access, May 28)

Canadian director Charles Officer’s return to feature-narrative filmmaking after more than a decade in television and documentary was one of the highlights of last fall’s TIFF. Playing a mid-level Toronto criminal with grace and courage, musician Saul Williams (who also produced the film’s hypnotic soundtrack alongside Massive Attack’s 3D) offers a challenging hero for complicated times. Akilla’s Escape may only cover one very bad night in the life of a city, but its power will stick with you for weeks. (On-demand, including Apple TV/iTunes and Google Play, June 11)[5]

Time travel, aliens, Chris Pratt – and many millions of dollars spent on explosions. That’s about all anyone knows about The Tomorrow War, Amazon Prime Video’s big summer bet. Well, that and the promising presence of director Chris McKay, who helped turn The Lego Movie and The Lego Batman Movie into far more entertaining prospects than either had the right to be. (Amazon Prime Video, July 2)

As if being (spoiler alert for a two-year-old movie!) killed off in Endgame wasn’t enough of a broadside, Scarlett Johansson had to wait a year and change for her big solo Marvel outing to make its way to the world. Hopes are ridiculously high for this prequel featuring a pre-Avengers Natasha Romanoff, but I’ll just be happy when I don’t have to read any more stories about its shifting release date. (In theatres and on Disney+ with Premier Access, July 5)

Apple TV+ broke the bank (but really, just found change in one of Tim Cook’s iPockets) to buy this feel-good family dramedy at this past January’s Sundance Film Festival. Judge for yourself whether the film, whose title stands for “Child of Deaf Adults,” is worth US$25-million when it’s available to stream this August. (Apple TV+, Aug. 13)

John Krasinski’s sequel to his sorta-silent horror phenomenon was one of the first major releases to be disrupted by the pandemic. But now that the vaccine-flush U.S. is reopening, Paramount Pictures is banking on the film to unofficially welcome audiences back to the multiplex in a big way. Will Canadian theatres be open by the end of May? Shhh, don’t say a word – the virus might hear you. (In theatres, May 28)

The Conjuring: The Devil Made Me Do It

The second sequel to 2016′s The Conjuring – but also the eighth film in the ever-expanding Conjure-verse – focuses on paranormal investigators Ed (Patrick Wilson) and Lorraine Warren (Vera Farmiga) studying a new supernatural terror. Given that this is from Warner Bros., which has digitally released Godzilla vs. Kong and other 2021 titles in a theatre-less Canada, there is a very good chance that The Con3uring (as I’m calling it) will be available via premium video-on-demand if our cinemas are still shuttered in June. But for now, this Devil is set to exclusively possess cinemas. (In theatres, June 4)

Another Warner title that could shift to digital depending on our COVID situation. I’m positive, though, that this adaptation of Lin-Manuel Miranda’s Broadway hit about a group of neighbours in New York’s Washington Heights plays best on a big screen, with the largest live audience you can corral. (In theatres, June 11)

Here’s where things get complicated – and, for this Fast & Furious super-fan, distressing: What will Universal Pictures Canada do with what is almost certainly guaranteed to be the biggest blockbuster of the year? Maybe Canadian theatres will be open by June 25. Maybe even with more than, say, 25 per cent capacity. It’s possible – anything is possible! But, as this year has taught us, “possible” doesn’t mean “probable.” So now we wait to see whether Vin Diesel and his merry band of driving dynamos will arrive in Canada safely, or speed right by. (In theatres, June 25)

Somehow, the power of nostalgia has convinced an entire generation that 1996′s Michael Jordan-Bugs Bunny match-up Space Jam was actually a good movie. (Okay, sure – I won’t ruin your childhood!) I also guess that this LeBron James-starring reboot has a lot to live up to. Then again, the basketball phenomenon was the comedic highlight of Trainwreck a few years ago. I live in hope. (In theatres, July 16)

Twist! M. Night Shyamalan has made a new movie during the pandemic. Second twist! It might be good, unlike his woeful superhero sequel Glass from 2019. Starring Gael Garcia Bernal, Vicky Krieps and the always excellent Ken Leung, the horror film takes place on a secluded beach that has the unfortunate power of aging its visitors rapidly. Sounds like the perfect movie to cap off a year that has collectively aged everyone’s spirits. Given Universal Pictures’ pandemic-era deal with exhibitors, expect this one to likely become available at home three or four weeks after premiering on the big screen. (In theatres, July 23)[6]

Yo, more Joe? Yes, the G.I. Joe franchise, which got a soft reboot with 2013′s G.I. Joe: Retaliation, is getting another redo with this spinoff about the title assassin. Henry Golding takes over from Ray Park, while Indonesian action star Iko Uwais co-stars as villain Hard Master. Guess Easy Master was already defeated. (In theatres, July 23)

While Disney has pledged to send two of its big summer titles to Disney+, it’s betting solely on theatres for this Dwayne Johnson/Emily Blunt adventure. The latest attempt from the Mouse House to turn a Disneyworld ride into a franchise (it worked for Pirates of the Caribbean; not so much Country Bear Jamboree), Jungle Cruise has big African Queen vibes – but, you know, if Humphrey Bogart could bench-press a cow. (In theatres, July 30)

Remember when, in David Fincher’s The Social Network, Justin Timberlake’s Sean Parker tells Jesse Eisenberg’s Mark Zuckerberg to lose the “the” in “The Facebook”? Well, this sequel/reboot of 2016′s super-villain adventure Suicide Squad does the opposite: it adds the “the,” as well as Idris Elba, John Cena and a walking, talking shark voiced by Sylvester Stallone. It does, though, lose original star Will Smith. But it also gains James Gunn, who seems to have turned this brand into a DC spin on his Guardians of the Galaxy. We’ll see if any of this adds up to something worthwhile at the tail end of the summer, when we’re all vaccinated and living the good life. Right? (In theatres, Aug. 6)

Urban legend has it that if you utter the word “Candyman” five times while looking at a mirror, the long-delayed reboot of the 1992 supernatural slasher will finally be released. I’m willing to risk it if there’s even a slight chance that Nia DaCosta’s horror will be available to watch in Canadian cinemas. (In theatres, Aug. 27)