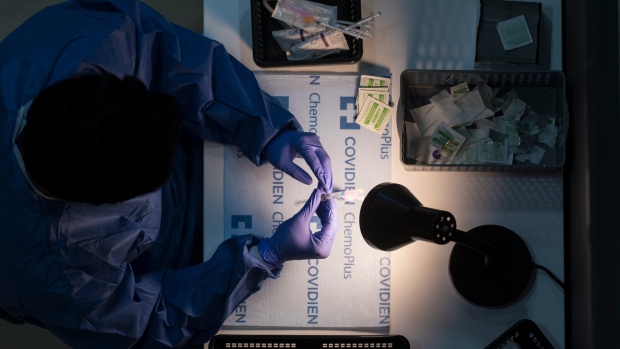 The City of Toronto has added a block of 120,000 additional vaccination appointments at its nine clinics as the province opens up eligibility to all adult residents.

As of 8 a.m. on Tuesday, all Ontario residents 18 years old and up can book an appointment to receive their first shot of a COVID-19 vaccine.

The decision to expand eligibility to all adults comes seven days ahead of schedule, due to a boost in supply that will see the province receive 2.2 million doses of vaccine this week.

Toronto officials have, however, expressed concern about the accelerated rollout.

On Monday, Mayor John Tory said that the city’s clinics were almost “fully booked” for the next two weeks and he conceded that supply “will likely not match” the number of those wanting to get a shot once eligibility is widened.

But in a release issued on Tuesday morning the city said that it has now been able to secure enough supply to add 40,000 additional appointments at its clinics each week for the weeks of June 14, June 21 and June 28.

The arrival of the new slots comes after nearly 9,000 people booked appointments at city-run clinics during a one-hour period on Tuesday morning.

“Thank you to Premier Ford and the Government of Ontario for working with the City of Toronto to open up these 120,000 more vaccination appointments in the city-run immunization clinics,” Tory said in the release. “We are committed to providing as many vaccine appointments as we can and the more doses the provincial and federal governments can provide, the more appointments we will be able to offer.”

The new appointments therefore come at an important time in the city’s vaccine rollout with all adults now eligible to receive a shot.

Prior to Tuesday, only residents 18+ who live or work in one of the province’s 114 hot spot postal codes and other prioritized groups were eligible to book an appointment.

“We’re going to see a tremendous scale-up of those who are vaccinated and it all boils down to the same thing; greater protection to the individual, greater protection to the community which all contributes to lower rates of COVID-19, lower hospitalization and gets us back to what we remember of the pre-COVID-19 era faster,” UHN Infectious Diseases Specialist Dr. Isaac Bogoch told CP24 on Tuesday.

Earlier this month, the province said it was on track to administer the first dose of vaccine to 65 per cent of Ontarians by the end of May.

As of Sunday evening, more than 7.1 million doses of vaccine have been administered across the province since mid-December, 2020.

At least 432,760 people in Ontario have been fully vaccinated. Two doses of vaccines that are currently administered in the province are needed for full immunization.